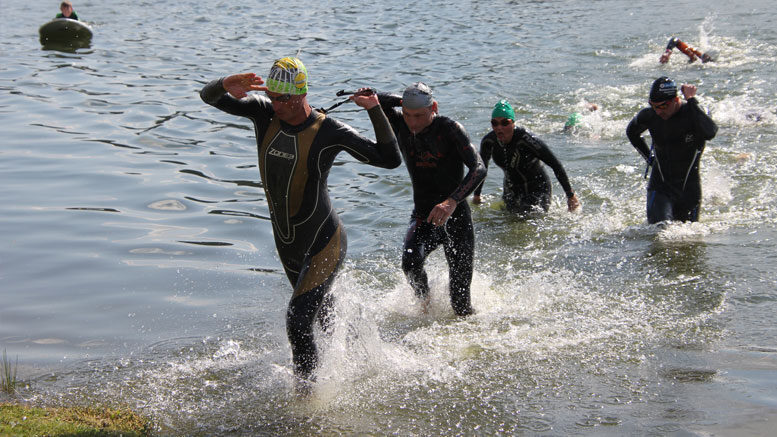 Last weekend the German Ratscher hosted this years Sprint World Championship. The event as always were extraordinary organised – thanks to Sebastian Diez and his team. The weather conditions were like in late summer, with temperature around 25 degree and light wind. Lake temperature with 18 degrees was also comfortable for wetsuit swimming. At the starting field were 49 athletes from 7 countries (Germany, Czech Republic, Poland, Hungary, Belgium, Norway, Italy). Due to the COVID athletes started in two groups to be able to keep the required distances.

In the men’s race Stefan Teichert (GER) and the current middle distance World Champion William Peters (BEL) took the lead after the swimming. They were followed by the chasing group with 15 seconds behind including the last years sprint World Champion Krzysztof Wolski (POL), and the present sprint European Champion Ferenc Csima (HUN). On the first part of bike course Csima closed the gap and took the lead. Only Peters was able to keep the tempo, other chasers were falling behind. Csima was trying to move away from Peters. On uphill he could increase the distance but on downhill Peters were always faster. So the dule was coming into the depo with only 1 second difference. The chasers Wolski, Lars Koch (GER), Leonardo Giusti (ITA) and Leos Rousavy (CZE) came 2 minutes later and this group was fighting to the remaining podium pace. On the 4 lap kayak course Csima took the lead and tried to tear away Peters – without success. As both athletes are very experienced marathon kayakers Peters was always able to stay on the wash of Csima, even after several fast sprints before and after the turning points. So the duel was coming into transition again together and the final decision was taken on the running course. Here everybody was expected that Peters will run home and wins the race. But unexpectedly Csima had better legs this afternoon and performed the 2nd best running time. After 1 km Csima was able to run away from Peters and won the race which is the first World Championship title for the 49th years old athlete. For the remaining podium place the competition sharpened. Thanks to his kayaking Oliver Trilling (GER) joined the group of Wolski, Koch, Giusti and Rousavy and the five athletes were within a half minute difference starting the final running. Here Wolski was able to fix the podium before Rousavy, Giusti and Koch.

In the women’s race the competition was tighter than usual. The top favourite also this time was the many times World- and European Champion Lisa Teichert (GER). After the swimming she and some seconds behind Anna-Lena Klee (GER) were the fastest. On the bike course Antje Fiebig (GER) was able to catch and overtake the leaders and came into the transition together with Teichert 30 seconds before Klee. On the kayak course Teichert took the lead and increased the gap to 4 minutes. Teichert did the 4th best kayaking time overall. Anke Trilling (GER) did also a fast kayak course and came up to the 3rd place. On the running course the chasers approached the leader but could not catch her. Teichert won the race with 44 seconds difference in front of Trilling. The third podium place was acquired by Fiebig. This marked a strong comeback for the Hall of Fame’s fourth-ranked athlete, who had been unable to compete for several years due to injury.

After the race the participants were saying THANK YOU for Stefan Teichert who during the last 2 decades fulfilled a tremendous work in the quadrathlon on national and on international level as well.

Next weekend the Hungarian Tiszafüred is hosting the Middle Distance European Championship. Several top athletes already registered to the race. After 3 years break the very strong Hungarian athlete Gergő Badar is starting in Tiszafüred again in a quadrathlon race. As a professional triathlete he was able to fulfil an ironman race with 8 h 23 min time some weeks ago.