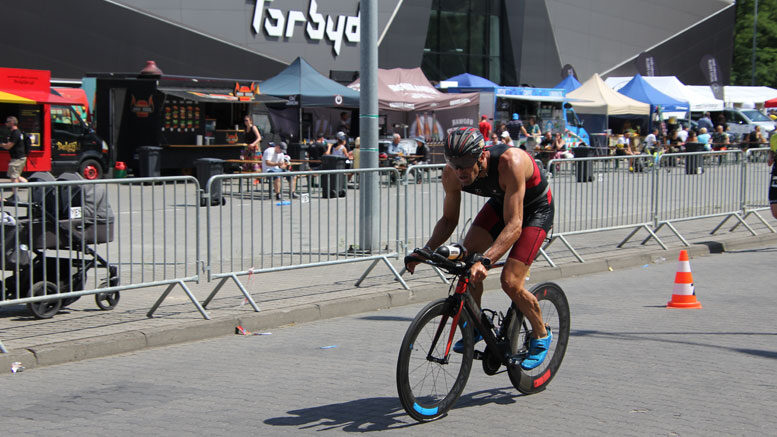 Last weekend the latest international title of the year was awarded – this time the European Sprint Championship. The venue, in sunny conditions, was in Bydgoszcz, Poland. A Quadrathlon had already been held there four times as part of the triathlon, and again this year, the race was held as part of the triathlon programme. Athletes were set off in pairs at eight second intervals (this was also the case in previous years, so it wasn’t due to the pandemic). This however meant that, despite the top athletes starting in the first groups, you didn’t know for certain who was leading the race. So, it was a matter of fighting to the end, as every second counted.

The short swim course was the same length as the triathlon which was only 500m and also ran downstream with the current in the river Brda. This meant that the fastest swimmer Piotr Rózalski (POL), finished the 500m swim in only 5.00 minutes and the fastest woman Lisa Teichert (GER) sprinted out of the river just two seconds behind.

The bike course is a really quick one. Although the 20km route isn’t really flat, it almost totally goes in a straight line and is on a closed expressway. After one out and back ride Ferenc Csima (HUN) posted the quickest time but auch Rózalski was also riding fast.

After the bike leg it was almost a 1km run out of transition to the kayak start (at the end, this time was added onto the run leg split). The 4.1km route on the narrow river was made up of one big and two small laps. A really strong current, partly flowing from the side and bouncing off concrete walls and various small excursion boats, meant that there was a lot of choppy water to contend with, which made things even more difficult for the competitors. These are conditions Csima can cope with very well. However, on this occasion he didn’t post the fastest kayak split, as this went to Estomba Borja. This wasn’t a huge surprise considering that the Spaniard has already enjoyed international success in canoe marathon. Lisa Teichert also showed her class in the difficult conditions, posting the fourth fastest kayak split overall.

To finish there was still a further 4.5km run leg along the river, until arriving again at the large start/finish area. Krzysztof Wolski (POL) posted the quickest run time. However, the Spaniard Borja was also looking strong – so who had won in the end?

It was clear to see that the men’s title could be narrowed down to the group of Rózalski, Csima and Borja but since you didn’t know exactly who had started when, you had to wait for the results list at the finish. In the end, Csima secured victory with a strong overall performance but was only a few seconds ahead of Borja, with Rózalski taking the bronze.
It was easier to see who had won the women’s race, as Lisa Teichert once again crossed the finish line with a strong performance and a lead of almost 6 minutes. Her performance in and on the water may even have put some pressure on the men. Team mate Susanne Walter (GER) again showed a top result finishing in second place but just lost too much time in the swim leg. Local competitor Martyna Cabaj (POL) completed the podium.

The triathlon in Bydgoszcz, which offers space to the Quadrathlon is a large event, involving several thousand athletes racing over different distances during the weekend. So, by Quadrathlon standards there is rather unusually a lot of hustle and bustle. Nevertheless, Quadrathlon organiser, Tomasz Hoppe managed to integrate the race into the large triathlon event very well. Even if Bydgoszcz cannot be compared with the often small and familiar Quadrathlons, a race in the eighth largest city in Poland is an asset to the Quadrathlon scene and despite the overall size, the event does justice to the individuality of Quadrathlon.

In two weeks time a double world cup will take place in Hunagry. In Kapsovar a sprint and long distance race will both be held. Already, for weeks, temperatures there have been over 30 degrees, so one thing seems certain – it will be hot!

Effort fight and success in the Quadrathlon World Cup in Cazalegas