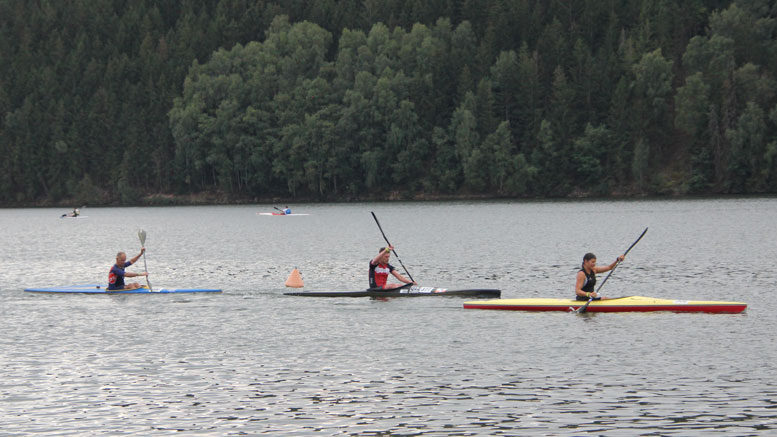 Unfortunately, the field of starters at the traditional venue of the German quadrathlon sport was not exactly huge and there were also some cancellations. So some of the usual athletes for the top ranks were missing. But there were a lot of strong athletes at the start. In addition, of course, there was a wide spectrum of ambitious athletes as well as people who simply enjoy our diverse sport. Since the sprint was a World Cup race, we also had an international field of starters. Hungary, France, Czech Republic, Poland and … of course Germany were represented.
At the start we had really good conditions: Optimal temperature, little wind/wave, a little overcast. Our swimmer in the elite age group, Stefan Griem, did not miss a beat and started the bike with a lead of almost one minute ahead of the two co-favourites, Ferenc Csima and Laurent Martinou. As expected, Laurent was able to catch up with his two main rivals on the bike. However, Oliver Trilling’s really great bike time should also be highlighted here!

In the paddle there is still no way around Ferenc … and that already in the age group 50, only both Trillings and László Szabó can keep up! As expected, there were many shifts in the rankings in the third sport before the final run. Marvin Bensch, for example, pulled ahead with the fifth-best paddling time, before he was able to score again in the run.
Slawomir Kaluzinski had double bad luck, first a crash on the bike course and then a broken paddle … no giving up, he made a short sprint to the campsite to pick up his spare paddle. Respect for this attitude! It is always nice to meet this likeable sportsman!

While running or already paddling, we were caught by a shower. Due to the duration and especially after this extreme dryness, really nobody should have suffered from it. In terms of performance during the run, Laurent managed to secure his second place. Although ten years younger (but much bigger and certainly a little heavier), only Stefan Griem came close to such a time, securing third place.

In the women’s race, Anna-Lena Klee set the bar high with her swim and didn’t let herself be distracted on the bike either, but because of her not yet fully developed kayaking technique, she had to build up a good time cushion in front of her competitors Anke Trilling and Susanne Walter! This was more than used up against Anke and even her better running performance was of no use. So we know what we have to train for now! Susanne was not able to compensate for her swimming time, which she felt was insufficient on this day, but she finished in a happy third place.
There was also a constant change of positions at the back of the field, so that it was not boring there either, as everyone did their best that was possible on this day. It should also be emphasised that Andreas Hausen was a nice companion to several athletes while they were running; in short, he had – orienting himself in front – inserted several conversation stations.
Unfortunately, the weather during the award ceremony was still not the best, but the mood of those present was. Apart from the overall award ceremony, we were also able to honour the winners of the German Cup.

Apart from the departing participants, the organisers, helpers and participating athletes spent a nice evening together with good food and drinks under a beautiful starry sky. Thanks Basti!
We also have to thank all the helpers who make such a successful event possible, especially Jonas Diez for his film about the competition and Lars Rohde, who always provides us with beautiful photos of the competitions!