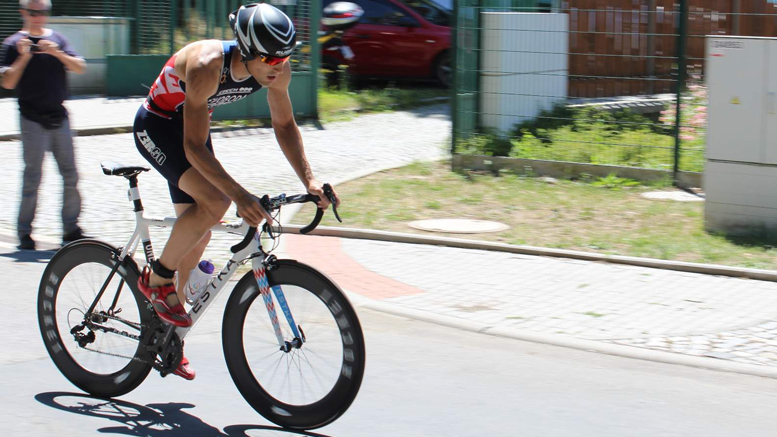 Over last weekend a quadrathlon with a long history was held again in the Czech town of Týn nad Vltavou. Jiří Kobera from the local kayak club has organized a top event here since 2002. This year’s race was again part of the WQF World Cup series.

In the very hot temperatures, Tomáš Svoboda (CZE) made a strong impression in the men’s race. This was his first quadrathlon but he has already represented the Czech Republic in some international triathlons and had prepared meticulously for the kayaking during recent months. A few weeks ago, he had an introduction to quadrathlon, as a runner in the victorious relay team in the long-distance race in Kretinka.

Right from the start, Svoboda pushed the pace. He swam the 750m course in 7:46 minutes and was 1:30 minute ahead of the chasing group of Stefan Teichert (GER), Ferenc Csima (HUN), David Kunderer (GER) and Leoš Roušavý (CZE). It was to his advantage that the kayak route was also quite short this year. Even so, he was unable to prevent Csima passing him and he set off on the bike in second place with Teichert close behind. Over the three mountain bike laps he caught Csima without difficulty and they began the final discipline close together. The run was to be conclusive, with the fastest running time by far, Svoboda was the first to cross the finish line.

Ferenc Csima also had a good run and claimed second place at the finish. Third, Leoš Roušavý won his duel with David Kunderer. Although Kunderer lost this battle, he could take comfort from being ahead of his fellow countryman, Teichert, for the first time.

With Tomáš Svoboda on the quadrathlon scene we have another athlete who can challenge Enrique Peces (ESP) or Gergö Badar (HUN). This is a great development, because the differences between these are getting narrower and the races more exciting.

Lisa Teichert was the winner of the ladies’ race again, but in the first two disciplines she had to fight hard against a strong Magalena Koberova. This 17-year from the Czech Republic showed a strong improvement from last year, but she could not keep up with the German’s cycling, where Teichert broke away.

After 6 of 9 World Cup races the series has never been as exciting amongst the men. Leoš Roušavý (365 points) is ahead of Laurent Martinou (345) and Stefan Teichert (320), while Ferenc Csima (290), in contrast to the first three, has only completed three races so far. The defending champion Enrique Peces (210 from two races) still has opportunities to add to his tally and win the Cup again.

Amongst the ladies, victory for Lisa Teichert (440) is now only a formality. But behind it is very exciting, currently Jean Ashley (170) and Mary White (140) are in places two and three. Both British women are sure to score again this weekend at the next World Cup in Box End (GBR). The persecutor group is clearly lagging behind Ferenc Csima also this time after the kayak forward Lisa Teichert and Magdalena Koberova come together from the kayak

Be the first to comment on "Týn: Svoboda a new guy for Badar and Peces"