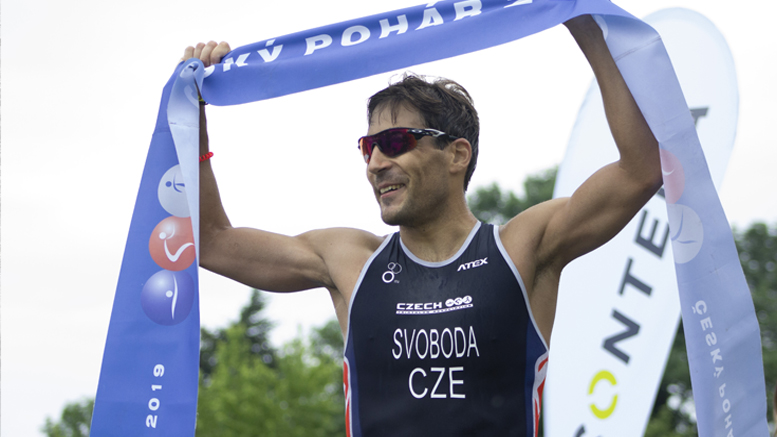 The small town Týn, on the river Moldau, was the location for this year’s European Middle Distance Quadrathlon Championships. There have already been many top class races held here and that was also the case this time. With patchy light rain but pleasant temperatures the spectators were in for a treat. With a course made up of lots of laps Swim (2) Cycle (5) Kayak (4) and run (3) one could follow the race up close.

In the men’s race many tipped Tomas Svoboda (CZE) to take the win but following his win in the world Championships race a few weeks earlier, William Peters (BEL), was also one to watch. As usual Svoboda dominated the swim, entering the mountainous bike leg with over 3 ½ minutes lead. The first chase group out onto the bike leg was made up of Ferenc (HUN), Leoš Roušavý (CZE), William Peters, as well as the two Germans David Kunderer and Stefan Teichert.

After struggling a bit on the bike leg at Brigg, here almost no-one could get closer to Svoboda. Only William Peter completed the tough bike leg in under an hour and got closer to the lead. Peter used his kayaking ability to take advantage of his chances on the kayak leg. Meter for meter he closed the gap and finally took the lead. With the fastest kayak leg of the day Ferenc Csima also overtook Svoboda. The race would be decided on the run. Svoboda gave everything he had on the first lap to take back the lead as unlike in Brigg, William Peters, did not have the legs to hold him off.

There was also a battle for third place- Csima, who isn’t known for his run ability tried to hold onto his position but Leoš Roušavý wasn’t far behind. In the end it was Roušavý who had the best run legs and took the final podium spot. Behind Csima, David Kotrč (CZE) took fifth place in only his second ever quadrathlon. As a very strong kayaker he has the potential to improve on the other disciplines.

In the women’s race, despite it being her first international race of the year due to illness, Lisa Teichert (GER) was still the favourite for the win. In the end, Teichert rose to the pressure but the women’s race was exciting until the end. Teichert’s training partner, Franziska Eberhardt came out of the swim with the first men’s group and had over a two minute lead on Teichert, who needed three laps of the bike leg to bridge the gap and take the lead. In her first Middle Distance race Eberhardt was finding the demanding bike leg hard going and two strong women, Susanne Walter (GER) und Magdalena Koberová (CZE) weren’t far behind. On the kayak leg, Teichert was able to increase her lead. Behind her Koberová, Eberhardt and Walter moved closer together entering the run leg in quick succession. Here, step by step, the 19 year old Koberová was able to pull away from her competition and it wasn’t impossible that she could take the race lead. Teichert was realising that at this level a Middle Distance is tough until the end and due to the lack of recent quality training there is still some work to be done to regain her top form. However, in the end she was able to maintain her lead on Koberová to take the win. The third spot on the podium was taken by Eberhardt who finished ahead of Walter.

Big thanks go to the organiser Jiri Kobera, who with his team, again put on a great event, which sets the standard in international quadrathlon competitions, for example by having again this year a live stream, where people could follow the entire race.

Most of the favourites will meet again next weekend at the European Sprint Distance Championship at Koberbachtalsperre (GER), where it will get hot again- and not just the temperature! 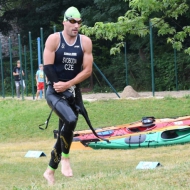 Tomaš Svoboda dominates all at the swimming 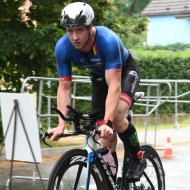 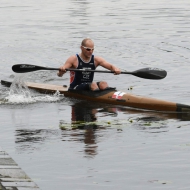 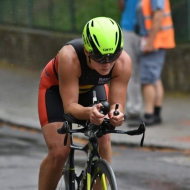 Lisa Teichert is back, but she wants more 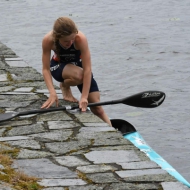 Getting better and better: Magdalena Koberová 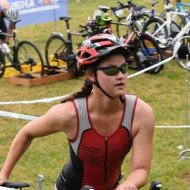 The favourites stand on the podium in Wassersuppe.