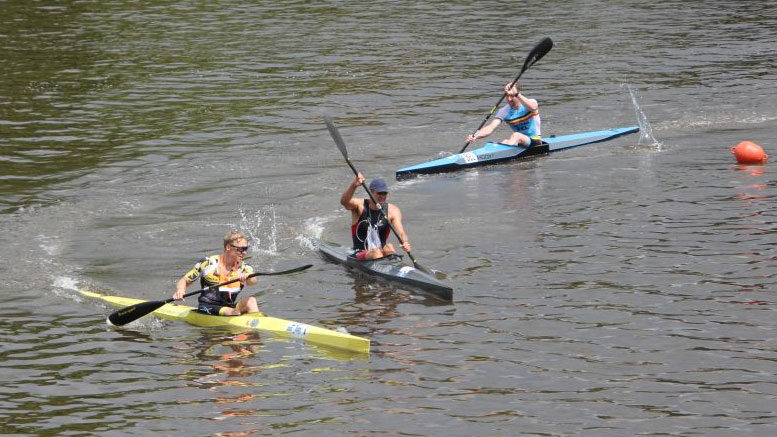 Slowly more normality returns to Quadrathlon and travel becomes easier for most people. Consequently, the Middle Distance World Championships at Tyn on the River Moldau (CZE) could take place with a strong field of competitors. The weather delivered optimal race conditions, with light clouds, hardly any wind and 22 degrees. However, the unanswered question was how well the different athletes had gotten through the past months and whose training had been setback?

Following two swim laps in the Moldau it was the young Patrik Minář (CZE), who came out of the water in first place. About 30 seconds later a group of three athletes followed: Krzysztof Wolski (POL), William Peters (BEL) und David Jílek (CZE). On each of the five laps of the 36km bike leg, which included a climb on each lap, Peters, Jílek und Minár increased the speed. However, Ferenc Csima (HUN) und David Kotrč (CZE) also kept the gap from the front small.

On the kayak leg, Peters pulled out in front alone but Csima und Kotrč, who are both strong canoeists, closed down on Peters on the five lap course and eventually passed the Belgian just a few meters before the transition area. However, Peters was clearly in the best form this year and quickly retook the lead on the shortened run leg (due to a tree that had fallen in a storm) and held onto it until the finish. With the win Peters defended his World Champion title which he last took in 2019 in Brigg (GBR). (There was no Middle Distance Championships race in 2020, due to reasons we are all familiar with.)

The runners up prize went to Hungarian Csima. A completely exhausted Kotrč took third place- however he has, in the last few years, developed from a pure kayaker to a multi-sport athlete and will from now on surely occupy the top positions more often.

Jílek, a strong triathlete, who only in 2017 was on the podium in long distance races, finished in 4th place, loosing valuable time on the kayak leg. Last year’s Sprint World Champion Wolski, had to settle for 5th place, after capsizing twice. The most recent champion in Tyn (2019), Tomas Svoboda, was also on the start line but only competed in one leg of the relay race. The quadrathlon scene would welcome the return of this top athlete to individual racing.

In the women’s race Lisa Teichert (GER) showed no weakness and took another World Champion title. The win was all the more impressive after having competed in the World Cup canoe marathon race in Paris the weekend before, where she gained a new experience (and a lot of sore muscles)! Returning to multi-sport, an unspectacular performance was enough for the Heidelberg based athlete to take the win. Second place also went to Germany: Susanne Walter, who had a poor start in the swim but pulled things together in the other disciplines. The podium was completed by the young local hero, Magdalena Koberová (CZE).

All in all, it was another great event organised by the local kayak club and organiser Jiri Kobera. It is a well-established race and each of the numerous volunteers knows what to do. It’s a race steeped in tradition, which every quadrathlete should complete at least once. The World Cup Series returns on 11th July in Bydgoszcz (POL), where the European Sprint Championships will take place.

[Not a valid template]
Weitere Bilder