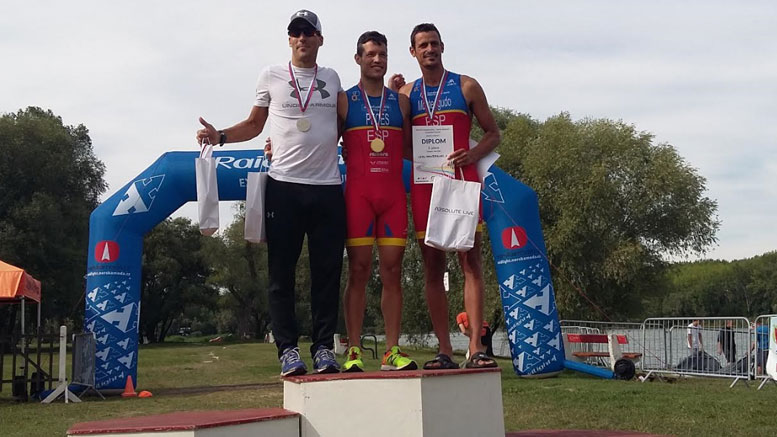 Expectations were high this year for the Quadrathlon Sprint World Championship and the spectators were not disappointed with an exciting race right to the finish. This year’s event was the first to be held at Komárno, after the previous six Slovakian quadrathlons held in Samorin. There was much in common between the two venues, high temperatures and a small lake (so wet suits were not allowed) and a flat fast bike route on an elevated and exposed dyke.

The list of starters promised a hard-fought race with almost all of the best quadrathletes entered. Unfortunately, Gergö Badar (HUN) had to cancel his start due to gastrointestinal problems shortly before the start.

On the swim course (750m) Tomáš Svoboda (CZE), as in his previous races, was well ahead – leaving the water a minute ahead of the rest. Albert Corominas (ESP), the 2014 world champion, together with Michal Buček, Miroslav Ozorák (both SVK) and Jonathan Monteagudo (ESP) formed the first chase group, closely followed by another containing the 2015 world champion, Enrique Peces (ESP), Ferenc Csima (HUN), Laurent Martinou (FRA) and Stefan Teichert (GER), just over 1:30 mins behind the Czech. All in all, a great start for an exciting competition.

On the flat, fast 20km bike course over two laps, where a speed of 50km/h could be achieved, Svoboda managed to expand his lead by a few seconds. Behind him the two groups of followers came closer together, with only Corominas not quite keeping in touch. With the closeness of the riders it was not always easy for the athletes to avoid drafting, but they all raced fairly. The middle part of the field was also troubled by this difficulty and several time penalties were given out.

During the 4km kayak leg Svoboda began to be chased down by seven athletes with very similar times. The two Spaniards, Peces and Monteagudo, quickly moved into second and third places and then passed the Czech on the last of the four laps. Ferenc Csima, who also passed the Czech, had the fastest paddling time. The conditions were very challenging, particularly on the down-wind turn where the wind whipped up the waves. This caused problems for some, the world long-distance world champion, Leoš Roušavý (CZE), capsized three times and he was not the only one to have an extra swim.

This set things up for a tense final running discipline with four athletes setting off for the three laps (5km) within a few seconds of each other. Csima could not match the pace of the others but held on to secure 4th place. Monteagudo was considered a favorite, because he had already beaten his compatriot Peces in a race in Spain earlier this year, but he could not keep up with the other two and ran in to the finish 51 seconds after the winner. The top spot was therefore going to go to Peces or Svoboda. Initially the Czech caught up a few meters but, luckily for Peces, Martinou, (who had lost time on kayaking) was a lap behind on the running track and Peces took advantage of the French runner to pull him along. In the end, he finished 20 seconds ahead of Svoboda and secured his third world title.

In contrast to the cycle, the running route was slow: on grass, sand and gravel. It was more of a cross-country course, but it was the same for everyone.

While it was really exciting for the men, the question in the women’s race was by how much could Lisa Teichert (GER) defend her title? The young doctor made it clear right from the start what her intentions were. She swam in the strong main group near the front with Csima and her husband Stefan, amongst others. On the bike and the kayak legs, she was not troubled the strong wind and continued to expand her lead. The German would have preferred firmer ground for the run but in the end she ran in a clear winner for her 7th world championship title – what a performance!

Behind the German the Youngsters Bibiána Grolmusová (SVK), Magdaléna Koberová (CZE), Kata Balázs and Fanni Bodolai (both HUN) had a competitive race. At the finish the faster run by Grolmusová proved decisive, pushing Koberová into third place.

With their move from Samorin to Komárno the organizers promised better conditions for the competition and building on their experiences in recent years the first event at the new location was a complete success. Although there is still some small room for improvements, the trip to Slovakia was very worthwhile. A big thanks for this great competition to the organizer Radim Kral, who has only married a few weeks ago – Congratulations! Martinou, Monteagudo and Buček Come from the bike Csima and Peces lead after paddling Lisa Teichert: a class of its own Perfect conditions for the Murray Quad

Be the first to comment on "Sprint World Championship – All Action"