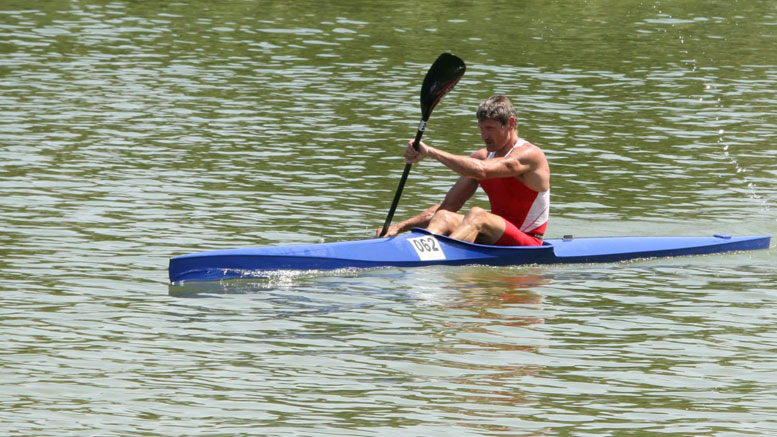 Temperatures of nearly 40°C and no shadow far and wide greeted the athletes for the European Championships in Slovak city Šamorín near Bratislava. 750 swim, 18km bike, 4km kayak and 4km run. Not even the swim would give the athletes a cool down.

The swim took place in the Danube in a side arm of the famous river. With a no wetsuit swim. Over 80 athletes hit the warm water. With some specialist swimmers in the relay section leading the way. Slovak Miroslav Ozorák (SVK) led the swim with a good 40 second lead. Followed by Stefan Teichert (GER) lead the quad athletes from the water in 2nd and Miroslav Podborsky (CZE) 3rd.

On the thin and winding flat bike course Podborsky (CZE) used his bike strength to his advantage but needed the whole bike course to catch the Slovak. Stefan Teichert consolidated his 3rd place.

In the kayak section Podborsky took full control of the race. Teichert was having a good race to move into 2nd. Behind are the strong paddle athletes Philip Petrla (SVK), Milan Oslík and Michal Háša (both CZE) and they all pulling closer to the podium places. The pre yearly winner Leoš Roušavý was still in striking distance.

In to the final discipline the 4km run saw Podborsky holding a commanding lead. Now the fight was on for 2nd between Teichert and Háša. Háša was eating into Teicherts lead and with 500metres for the line, sprinting towards the line saw the young Háša having more speed. 4th place went to last year’s winner Leos Leoš Roušavý. Leoš Roušavý still leads the world cup points standing, but only 20 points adrift is Teichert and Háša.

By the ladies race Lisa Hirschfelder (GER) lead her strong leg the swim. She held her lead also in the bike and kayak section. 2nd was Ellen Mielke (GER) just ahead of the young Natália Paulik (HUN). The fastest bike split was from Diana Tešovicová (SVK) which put her in a strong position for the rest of the race.

By the kayak leg saw Paulik and Tešovicová eating into Hirschfelders lead. The final leg of the race saw the heat really play a part as Lisa melted and cramp hit her and the field began to pass her. She was to finish in a brave 3rd place. The victory going to a strong run finish by Tešovicová who had to pass Paulik also to win her European title.
In the world cup standings it’s still Lisa Hirschfelder that holds a good lead, followed by Ellen Mielke.

Some amazing performances in the 70 age category by the German Stefan Barthel who overcame the strong heat and beat Edward Maziarz of Poland who both left competitors younger in their dust. Great stuff guys, keep it up. Podborsky, after the World, he also secures the European title