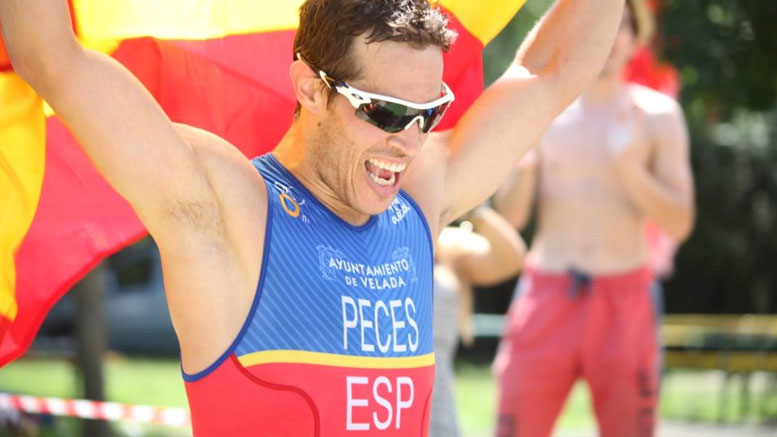 Over the last weekend in July, quadrathletes met in the Slovakian town of Šamorín for the European Sprint Championship race. Near to the capital, Bratislava, this small town is well suited to the Sprint distance, having the fastest course on the international quadrathlon circuit.

The race started with a 750m swim in a side arm of the Danube, followed by an 18km out and back cycle along the embankment of the river. Even though the wind blew strongly at times, speeds regularly exceeded 40km/h. Then it was back onto the river for a 4km kayak over four laps. With nearly a hundred paddlers on this short stretch of water lots of waves and bouncy conditions were generated. Challenging for the kayakers but great viewing for the spectators. Then it was back onto the river bank for a single lap run of 4.5km. This took place in fierce sun, as has consistently been the case here in recent years, with temperatures above 30°C.

The high temperature meant that it was a non-wetsuit swim and in the men’s race Miroslav Ozorák (SVK) was first out of the water. Only 15 seconds later he was followed by Enrique Peces (ESP) with Ferenc Csima (HUN) and Stefan Teichert (GER) close on his heels. Teichert had the fastest bike split but this was not enough to shake off Ozorák and Peces. Then it was onto the kayak leg and the likely final standings began to become clear. Peces moved ahead and steadily increased his lead. Meanwhile, with the second fastest kayak split, Ferenc Csima (HUN) brought himself back into contention for a place in top three, passing Teichert and putting himself into second just before the final transition. The Spaniard, with the best run time, went on to a clear victory, but behind him a battle for the remaining podium positions was developing. A group of top athletes consisting of Csima and Teichert, closely followed by Filip Petrla (SVK), Milan Oslik and Leoš Roušavý (both CZE) were all within a few seconds of each other. The fierce competition continued to the very end. Although Teichert tried everything as they ran the last 30m, Csima was not to be overtaken, nevertheless their desperate sprint kept their pursuers at a distance, although Roušavý was making up ground all the time. The top three finishers were thus Peces, Csima andTeichert.

In the women’s race, the result was clear from the outset. Lisa Teichert (GER) was not to be seriously challenged, being the first lady out of the swim although Laura Csima (HUN) was also going well and not far behind at the first transition. By the end of the bike section Teichert had extended her lead to 5 minutes. As with the men’s race the competition for the remaining podium places was intense, after the kayaking only 30 seconds separated Laura Csima, Fanni Bodolai (both HUN) and Magdaléna Koberová (CZE). During the run Teichert continued to press hard and extended her lead to nearly 10 minutes, meanwhile the following group were having an exciting race. Although Csima started the run in second place, Koberová was able to get past her and they both just managed to keep Bodolai at bay.

Following its introduction after last year’s race the organisers again had a relay race shortly after the main event. So, after a 2.5 hour break, the athletes were back out on the course, but this time in teams and for fun rather than intense competition. Even so, the first two finishers from the individual’s race were again first to cross the line. As a team of two, Enrique and Ferenc, gave no chance to four person teams.

After the competition in Slovakia there are still three races in this year’s World Cup to look forward to. Two sprint distances, at Balaton (HUN) and the mountain lake Ratscher (GER), and then the conclusion of the season in Oslo (NOR). There is no doubt about the top of the tables as Enrique Peces and Lisa Teichert are already assured of their glass globes as WQF World Cup winners, but the other medal places are still to be decided in the last few races. Enrique Peces back to winning ways Like her father, on the podium: Laura Csima to third place