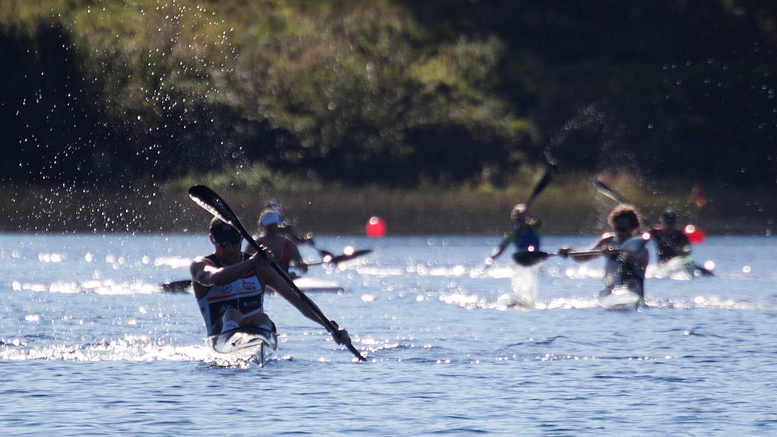 The Norwegian capital Oslo has added another World Championship to the list of events hosted there. Quadrathlon at Lake Bogstad now takes its place alongside such sports as cross country skiing and biathlon at the famous Holmenkollen site. This was the last race in the 2016 World Cup Series and would decide the silver and bronze places in the overall standings amongst Ferenc Csima (HUN), Leos Rousavy (CZE) and Stefan Teichert (GER). There was also excitement to see how the Norwegian athletes would fare in the competition for the points available. Their nation produces many top cross country skiers but how would they cope with the four quadrathlon disciplines?

This race was organised for the first time last year by Katarina Liptáková (a native Slovak) and the Oslo kayak club and this year they put on another successful event. Even the weather helped, with sunshine and temperatures above 20°C, which is not necessarily the case this far north at this time of year. The lake was however a bit chilly at 16°C.

The swim was two laps, each of 750m and Csima and Teichert immediately took the lead and began an exciting contest. They came out of the water about a minute ahead of Morten Sjursen (NOR) and a further two minutes in front of Rousavy and Mathias Hamar, one of the best paddlers in Norway.

Teichert was expected to do well on the 48km bike course, but would this be enough to hold off Csima and the other strong paddlers? Teichert duly extended his lead over the three fast and hilly laps while Rousavy made up some time on Csima and Felix Breitschädel (AUT) and Kristian Saeterhaug (NOR) pushed forward. The cycle course was not closed to traffic and the few cars were hardly a problem, but there were some roller-skaters that the cyclists needed to keep a wary eye out for.

After the return to the transition area, it was back to the lake for an 8km paddle over four laps and, as expected, Csima put in a faster time than Teichert. The Hungarian is one of the strongest paddlers in quadrathlon, recently he was third in the World Canoe Marathon Masters championships. He passed Teichert during the third lap and then extended his lead to about three minutes and pulled further ahead of the following group of Rousavy, Saeterhaug and Breitschädel.

The run was 3 laps making up a total of 9km. This was good for the spectators as they could follow events closely. Each lap was mainly uphill for the first 2km followed by a steep descent. By the end of the first lap Teichert could see the Hungarian, overtaking him during the second lap and consolidating his victory in the third. Csima’s strong showing in the first three disciplines rewarded him with second place in the race which earned enough points for silver position in the overall standings for the World Cup series. (The top three were Enrique Pesces (ESP), 460 points; Ferenc Csima, 420 points; Stefan Teichert, 400 points). Rousavy was showing the effects of a long season and could not hold off Saeterhaug and Breitschädel on the run in to the finish, where they took 3rd and 4th respectively within 30 seconds of each other.

In the women’s race Stefan Teichert’s wife Lisa was safely across the finish line in first place and has an unbeaten record in this year’s Quadrathlon season. Seven out of a possible eight World Cup races entered and won – what an achievement! The other podium places went to Kristian Landmark (NOR) and Veronika Danišová (SVK). The Norwegian was behind after the swim but managed to just get ahead on the bike and build a small lead on the kayak. On the run Danišová was injured and had to walk, leaving Landmark safely in second.

At the finish the athletes enjoyed great baguettes and delicious home baked cakes. The Quadrathlon community can be pleased with another great competition in the calendar, which hopefully will become a regular event! Pleased about the victory: Stefan Teichert