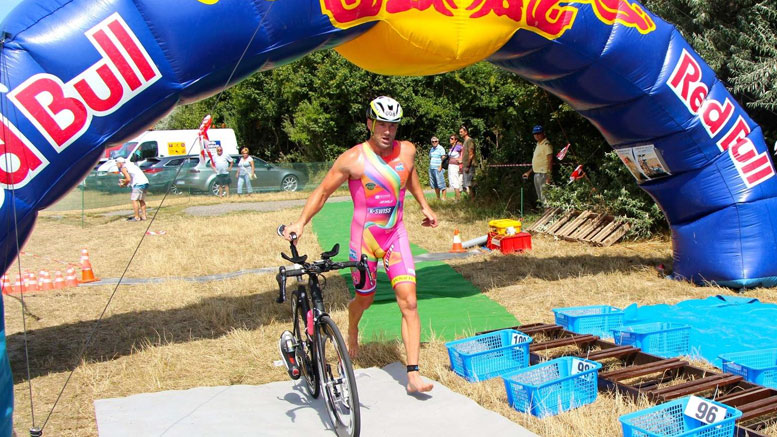 A Quadrathlon festival was the Theme last weekend in Slovakia. Just a short distance from the captail Bratislava, saw a super organized event with many spectators and a great atmosphere. By warm temperatures started the field at 11am with a non-wet suit swim. The quality of the field was immediately to be seen, with so many athletes coming out of the water in close proximately. The early leader was Ondrej Obst (SVK) in just under 10minutes. Followed by Albert Corominas (ESP), Lisa Hirschfelder (GER) swam with the best men to come out of the water with a commanding lead.

Into the transition area with a steep run and then a very steep run with the bike saw the athletes ride along the Danube river bike route into a blasting wind. Immediately Miroslav Ozorák (SVK) showed his strength and set the pace, followed close behind from local favorite Michel Buček (SVK). In 3rd and 4th place just under a minute behind was Stefan Teichert (GER) and Enrique Peces (ESP).

The paddling course was held over a 1km course and with just under 100 starters it was going to be a fight all the way around this course. Then the strong wind added an extra twist. For the spectators it added to the atmosphere as they cheered their favorites. Michal Buček took the lead and pushed hard all the way. Peces showed his strong paddling style and moved into 2nd place. Filip Petrla (SVK) gave the crowd more to cheer about as he moved into 4th, behind the strong paddler and defending champion Albert Corominas (ESP).

The run was where the title was going to be won. A straight out and back course along the river saw speed at its best as Peces showed his class. Buček fought hard to hold on to 2nd a class performance. Last year’s winner Corominas used his long legs to finish 3rd. Just before the finish Roušavý (CZE) caught Petrala (SVK) but with the crowds support he put in a sprint to take 4th. Then the athletes poured into the finish. Showing that Quadrathlon is a top sport in its own right.

In the ladies race we saw a top top performance from Lisa Hirschfelder (GER) a swim of class. She then she pushed her lead with a strong time trial performance on the bike. In the water by kayaking she saved her energy and paddled efficiently to enable her to run well in her weakest leg the run. She looked ecstatic as she strode over the finish line.

It was a close race only for 2nd. The young Hungarian Fanni Bodolai excited 2nd from the swim, closely followed by Ellen Mielke (GER) master W50. Mielke pushed her strength on the bike but had to let the young paddler Bodolai come past in the paddle section. In the run we saw a classy performance by Simona Mičušíková as she overtook Patrícica Skovajsová (SVK) and Mielke to finished 3rd. Bodolai sprinted for her life to take 2nd. Just seconds ahead of her competitors.

After everyone had caught their breath and moved their equipment out of the Transition area we saw the Relay start. It was fun to see the Quadrathletes that had raced for their lives less than an hour before line up and push the boundaries again. What a great idea. Pure atmosphere as the team spirit was seen to the maximum. Race organizers please take note. Gala presentation by Enrique Peces, who will be a hot favorite even at the WCH in Poland Shortly before the finish Roušavý catch Petrla, but the Slovak win the Sprint World Championship number 2 perfect, it seems to be the year of Lisa Hirschfelder Be the first to comment on "Šamorín: World Championships Sprint distance titles for Peces and Hirschfelder"