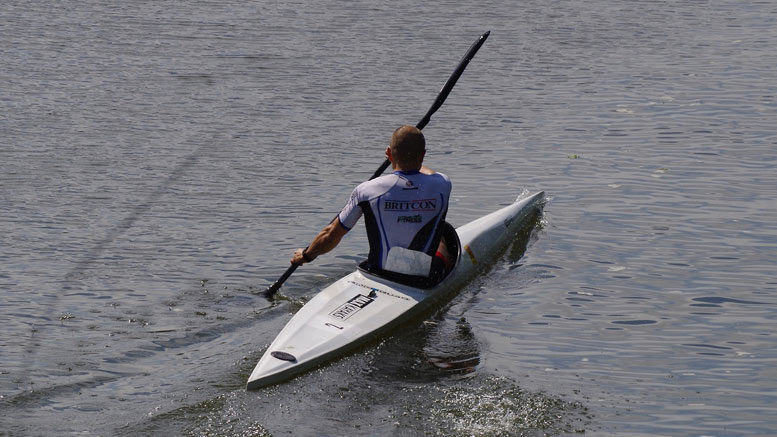 It was lovely to be back racing again and renewing friendships between competitors that have not been able to meet up for over a year.

Brigg in Lincolnshire is the usual venue for the opening race of the GBR season. This year it was also a World Cup race, although under the current circumstances no overseas athletes were able to take part. Because the race numbers were expected to be lower than usual, the organisers (Lincsquad) added a triathlon to the quad, which doubled the number of entries. The other changes imposed by the COVID conditions were to reduce the swim distance from 1500m to 800m as many would have had little opportunity for swim training; the bike route (32km) was changed to a single lap but slightly shorter than the 2 laps of recent years; the 7km kayak route was unchanged from last year; and the 10km run route was changed to a single out and back lap, avoiding the town centre.

The start was staggered, with two athletes going off at 30s intervals. The start order was determined by predicted swim times with fastest setting off first. In the Men’s race Steve Clark and Mark Walsh were closely matched in the swim with Michael Mason over a minute behind. Mark was fastest in the bike leg, but Steve had lost some time while Michael moved up into second. The kayak section was decisive, Michael was fastest by far and built up a 6 minute advantage, Steve had closed the gap on Mark and was only 30 second behind. Michael extended his lead on the run, while Steve moved up into second place.

In the Women’s race, the lead was similarly exchanged during the course of the event. Sallie Joseph and Helen Adams set off together on the swim. Helen came out in first place by over a minute, while Helen Bainbridge, who started much later, was second Lady swimmer. Thereafter, the battle for to top place was between Sallie and Helen Adams. Sallie was almost 2 minutes ahead after the bike but Helen Adams was much faster on the kayak and established a 10 minute lead. A super run from Sallie allowed her to regain first place which she held onto by the small margin of 14 seconds.
The race was held in wonderful weather and Lincsquad put on a very well run event. Their marshals, as ever were terrific, efficient, friendly and encouraging. Many thanks to the organisers for putting the event on, especially under the current circumstance where COVID rules and advice are changing so frequently and unpredictably.