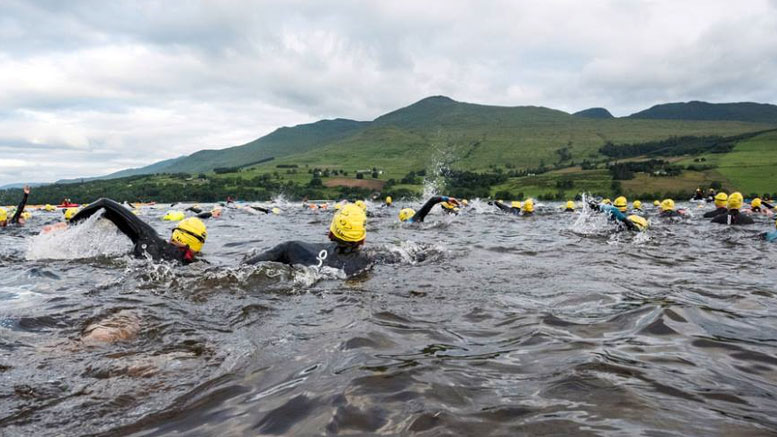 Race Report from Richard Felgate: So what’s this Kindrochit Quadrathlon Malarkey? Well I didn’t know until just over a year ago when a business colleague (Simon) said you like the mountains – what do you think about this?

The basic stats are:
Swim 1.4km
Run / Climb / Walk 26km with 2,500m of ascent over 7 Munros (mountains over 3,000ft)
Kayak 11km
Cycle 56Km
It’s set in one of the finest parts of Scotland around the Ben Lawers mountain range & Loch Tay.
You compete as a team of two – you can be apart on the Swim, but once you leave T1 you have to stay together (the kayak is a 2 man)

Simon & I had done a couple of Tri’s together and weren’t far off each others pace, so we said let’s give it a go. My last 8 months of training has been geared towards this – Fell Races, Kayaking & Big days in the Mountains. All of which were nearly de-railed when I damaged my ankle in January and couldn’t run for over 3 months. But just about sorted in time.

We drove up to Scotland on Friday and had enough time to drive into the foothills & visually check some of our plotted lines of ascent & descent on the mountains – There are mandatory check points on all the summits, but it’s up to you to plot your route in between, most the ridge lines are obvious, but the quickest ascents / descents are often a bit “off piste” so was worth checking as far as we could from low level.

Then onto Registration. I’ve got to say, the organisation was first class all weekend, loads of enthusiastic people helping everywhere, also as most people are camping on site, the atmosphere and craic is excellent.
We registered then double checked all our gear before heading to Kit Check In. There’s quite a lot of mandatory kit, particularly for the mountains (eg enough food / water, waterproofs, hats, gloves, exposure bags, maps, compass, fully charged mobile phone, torch etc). Once checked, your mountain & kayak bags were sealed & left with the organisers for transportation to the Transition points. We then racked our bikes, scoffed pizza, attended the compulsory briefing & got to bed at 9pm.

Some years, this race has been in rain & zero visibility – We were so lucky, we woke to pretty well clear skies, although there was a fair wind.

A quick bit of light breakfast & then the 5.30 warm up – You know it’s not going to be easy when the Royal Marines are leading the warm up!! It certainly got you warmed up and then we were all led to the waters edge by a bagpiper!

The water was cold, but not too bad, then it was 6.00 and we were off. The water was just black – it was so deep, but the visibility was excellent, you could see the feet of a swimmer 20m in front of you.

Swim was fine, into T1 and changed into mountain clothes whilst trying not to getting feasted on by the midges – argghh

And so into the mountains, took it easy at first to get the legs properly going, then started to push on. It was soon clear on the first big ascent that Simon wasn’t going to maintain the same pace as me, so I generally carried on ahead at my pace, then waited for him. It was going to be a long day and anything could happen, so you just go with it.

The mountains were hard, the scenery was totally stunning which kept you motivated, but to maintain a good pace was tough. I was finding the uphills not to bad, all the training was paying off, but after the first 3 or 4 descents from the summits, my ankle was starting to get very sore, also my opposite knee was starting to give me grief as I think I was using that more to try & ease the load on my ankle. The downhills were now much harder than the ups!

Also, it doesn’t matter how long you’d spent studying the OS maps, you don’t fully appreciate just how much descent and re-ascent there is between summits.
Eventually after 6 of the 7 Munros you drop right down to a feed station in the valley, this was really welcome, but there was a big sting in the tail, as the toughest mountain was still to come!
After over 8 hours we made the Loch shoreline and the mountains were behind us. I know I could have been a lot quicker on the ascents, but the last couple of descents were hard as my ankle and knee were crying enough.

So onto the kayak, again we were lucky as the wind was behind us. My training paid off here & I dug deep and we flew, passing quite a few others. The biggest issue was going to be at the end trying to get out the kayak – Trashed legs from the mountains, which have just been bent up in kayak doing nothing for over 1.5hours – sure enough then didn’t work too well & I nearly fell straight over into the Loch. The 800m run to transition was definitely a wobble & a stagger until my legs came back to life.

So we’re now just over 11 hours in and just the bike to do – so glad this was last.
As you’d expect in Scotland, it wasn’t flat & we started off straight into the wind. Once we got going I was surprised how good I felt, but Simon was empty. I could have had a real push for the finish, but this was now all about how quickly could I get us both there. I got him on my back wheel & judged my pace so not to keep dropping him. We stopped at both the feed stations, so he could top up. The first one was great – how many feed stations have you had battered Haggis & Chips at??

Eventually we got round, 13 hrs 52 mins and a great sense of achievement. A few beers were sunk as a ceilidh band played into the night together with a great firework display.

I thought this was going to be a one off, but I’ve definitely now got unfinished business here. I know I could have got very close to 12 hours on the day & if my ankle / knee was sorted, then 11 hours or less would be quite doable.

Anyway, now 2 weeks on holiday in the sun to recover.

Thanks to Ed Smith for some of the photos Yes we are in scotland Checkpoint on the top Same kayaks for all Fireworks at the end

Be the first to comment on "The Artemis Great Kindrochit Quadrathlon"