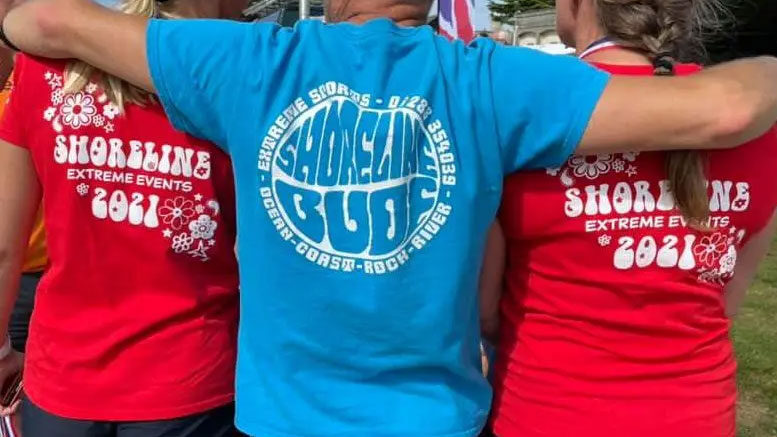 A Big Thanks to ‘Shoreline Pursuits’, Simon and his Team, for putting on yet another Awesome Foursome race again! Special Thanks to the many Volunteers and to ‘Bude SLSC’ and their Local Lifeguards for their water safety cover who are crucial in helping run this great little event. A great effort by everyone with all the extra restrictions they have all had to overcome, in these challenging times! Having missed the event this year, BQA member’s Nick Farnell and Pete Chappill have both kindly sent me their race reports … Big thanks to Nick and Pete, the BQA really I are always greatfull when we get some input from fellow members …it’s always good to have the support and views … THANKS!

Nick’s Report – We’ve enjoyed two brilliantly organised Quads, so far this season at Brigg and Shrewsbury. How would Bude measure up? Answer, no less than Awesome thanks to Simon Hammond (race organiser) and his team. We started off with grey clouds, but the sun quickly appeared along with the locals and holiday makers who showed a keen interest and were supportive of the event and cheered us all on, making for a great atmosphere.

The age distribution of the solo competitors this year showed a preponderance of men in the over 50s and 60s, but only one senior male namely, Michael Birchmore who went onto win the event. We had 2 senior women and one in the over 40s. 5 relays and 6 pairs joined the throng.

The swim start was in the sea, rough enough for the surfers to test their skills and judging by the flags and burgees , we had a nice onshore breeze, The tide was well in and I suspect the proposed 800 m sea swim was a tad further. We raced out to sea through a boating channel which acted as a rip current and then hit the waves which helped us back into shore and then back out again for a second helping. The bike was exciting and armed with the all the aerodynamic accoutrements, a 70km/hour plus descent to Widemouth was easily manageable. Winding coastal roads and a 1 in 3 climb followed. The kayak section in the canal required vigilance with low headroom bridges, zig zagging pedalo craft, ducks and swimming dogs. The run took place over varied terrain and the views from the coastal footpath were spectacular.

Our solo senior male Michael Birchmore developed a commanding lead in the swim and continued to extend his lead throughout the next 3 disciplines posting an impressive overall time of 2 hours 41 mins and 13 seconds. Second overall was Nigel Unwin who was in true warrior mode and put in an impressive performance with another sub three hour time of 2 hours 56 mins, Sam Pantling came third in just over 3 hours and was first male over 40.

In the women, we had a battle Royal in the swim between Harriet Enoch and Rebecca Newson, both ladies had similar fast swims, but as the race unwound Harriet pulled ahead in the remaining disciplines and impressively posted the fasted kayak time of the day. Harriet, also managed a sub three hour time (2 hours 57). Rebecca came in second (3 hours 14) and Sally Crabb was third and the first over 40 forty female.

In the remainder of the age groups, as stated before, Nigel Unwin won the over 50s with Paul Cottle and Glyn Collen second and third respectively separated by less than a minute. In the over 60s, Nick Farnell was first with Peter Chappill second and Mini Fry third.

In the Pairs , Lee Sampson and Simon Hammond posted a winning time of 2 hours 53 and in the relays the Fore Shore team won in 2 hours 50. I was amused by Simon Hammond who although in race mode ,during the kayak leg had time to put his organisers hat on and ask the passing kayakers how the bike leg went.

With the competitors safely back in, we had the medal giving ceremony. The quality and quantity of the trophies awarded was impressive and appreciated . A great finish to the Quadrathlon season.

Pete’s Report – Arriving in Bude is always a joy it feels like home. While preparing equipment for the 10 am start of the 2021 Quadrathlon it was drizzling but a comfortable temperature. Something new to focus the mind has been a theme this year. The transition was on the hotel side grass bank which is long and thin. Kayaks were laid next to the canal bikes rested against the fence or wall. This provided plenty of room for all the equipment. The benefits were clear.

Briefing time and the rain stopped the sun showed it’s face and smiled on the riotous participants. The swim start was in the same place but the tide was very high which meant only a short run on the beach to the turn flag in fact running in the water was the order of the day. The local lifeguard crew stated conditions were calm. Being one of those from the flat lands of Lincolnshire it looked like a heavy swell too me. The event set off watched by a very vocal crowd offering support. The serious racers were away.

Both laps completed out across the still flooded bridge up the steps and something new to focus on. Go straight across the lock gates and into the transition. The run into transition was about the same distance but easier on the feet due to the grass. We collected our bikes for the on coming battle with Millook. Out of transition on the opposite side of the road bridge to normal no cobbles or dog walkers to negotiate and good visibility both ways for a safe entry into the traffic system. Slight head wind on the coastal road allowed a steady transition into bike mode. Riders attacked the steeper parts in their own way. Some wear trainers and run up. Some remain attached to the bike but getting the job done is the aim. Onto the road home with long sweeping descents allows time for hydration. Weather still kind.

Transition in was the same as the out, propping up the bike out the way then lowering the kayak into the canal. Two choices here climb into water which was about 60cms deep then climb into kayak or step down into kayak. All headed to the sea lock gates around the buoy then head towards the narrow turn. The participants waiting for each to turn as for some it is a 10 point turn. The usual two laps then into transition. Climb out the kayak or in my case roll out. lifting it onto grass. Running shoes on and out the transition across the road and onto the usual run route. The sun was shining the views from the coastal path as breath taking as ever helping with fatigue and inspired effort to the finish. Coastal erosion meant that the new pathway was not as worn and softer under foot. The finish line was in the usual place and had the usual loud welcome.

Total Respect to Lincsquads ‘Andrew Lawson’ who set off at 03.30am travelling over 300 miles arriving at the start to complete his first ever sea swim event.

Another event completed by all in what has been a short series. Those that completed the three events felt lucky and thought of those who could not for various reasons. We wish you all well for 2022. A massive thanks to all involved in organising and marshaling these events. 2021 has seen some enforced new approaches to the events but the core principle of friendly participation has not changed thanks to the BQA committee and members.

See you next Season Pete Chappill 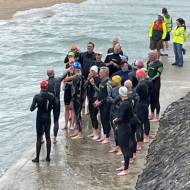 Shortly before the start 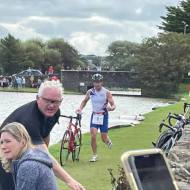 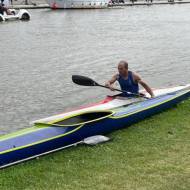 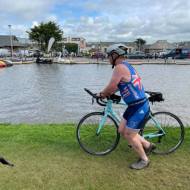 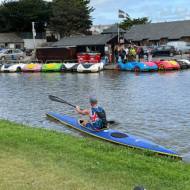 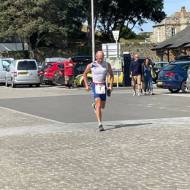