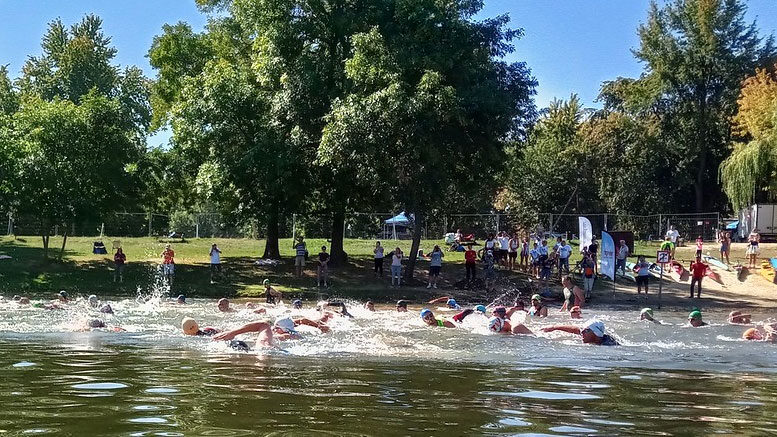 On 12 Sept the middle distance European Championship was hold in Tiszafüred Hungary. The event was organised by the Hungarian Sri Chimnoy Marathon Team with the help of local canoe club on the water. The circumstances were like in summer. Air temperature up to 30 degrees, light wind, water temperature 21 degree. As during last years beside quadrathlon there was also an Olympic distance triathlon race, with separate starting time.

In the men’s race Krzysztof Wolski (POL) took the lead during the 2 laps swimming course. He was followed by the Hungarian chasers group consisting of Ferenc Csima, Dávid Pélyi and Gergő Nagy, with 30 seconds behind. On the 40 km 1 lap flat bike course on the Tisza dam, this years sprint World and European champion Csima pushed the pedals and built up a 3 minute gap. On the 9 km 6 lap kayak course Csima further increased his advantage with the best kayak time. Pélyi – who is a former junior World Champion in kayak – overtook Wolski on the kayak course and came on the second place into the transition. The running was already a formality for Csima, who even with a relaxed running performed the best running split on the 5 lap 10 km course and set up a new track record in Tiszafüred with a total time of 2:54:22. The battle for the second place continued between Pélyi and Wolski. Wolski was caching and overtaking Pélyi on the 4th lap and was candidating for the silver medal. However Wolski was totally running out of power while Pélyi had some reserve yet and was able to overtake back Wolski on the last running lap and finally won the second place.

In the women’s race 3 Hungarian athletes – Fanni Kiss-Bodolai, Csilla Sápi and Bernadett Cseke-Nagy – were fighting for the podium places. After the swimming the 3 ladies were together within 1 minute difference lead by Sápi followed by Cseke-Nagy and Kiss-Bodolai. The decision on final places was already done on the cycling course where Kiss-Bodolai built up a 4 minute gap to Sápi. At the same time Sápi had also a big 7 minute difference against Cseke-Nagy. On the remaining kayak and running course Kiss-Bodolai performed the best times and won the race with big difference. So the comeback after her baby born was very strong with her first championship title. Sápi did balanced kayaking and running and secured the second place, while Cseke-Nagy won the bronze medal.