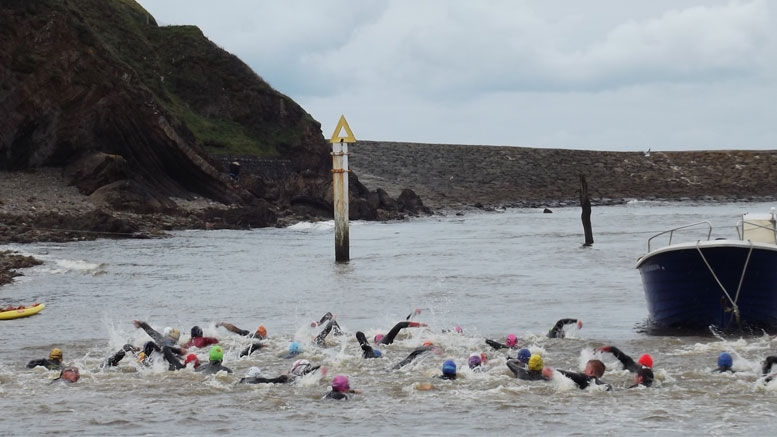 As ever Bude lived up to its reputation, another brilliant Awesome foursome! The turnout was great with over 100 athletes racing individually, in pairs and teams, though the build up was slightly harrowing for race organizer Simon Hammond, the early part of the week the beach was closed due to the invasion of the Portuguese Man O War Jelly fish, and then there were high winds, huge swell and waves and torrential rain, which would of made the course lethal. The night before we were still being battered by the weather, but miraculously Saturday morning the weather Gods were on our side and we were blessed with sunshine, light winds, it was cool but it was 100% better than the forecast!

It was a 2.30pm start due to the tide and as ever Simon kept us all entertained at the race briefing with his banter, it always helps with the race nerves as everyone goes into the water with a smile! The swim is always starts fast as the Bude surfers speed off not giving a thought to the size of the waves, its always difficult to workout who is in the lead in the individual race as the local boys and girls make up relay teams. Alan Cole was 1st out 17:.46 with a good lead from all the other individuals, he needed to move fast as he needed maximum points to win the overall Trophy Series.

However local athlete Chris Hammond was very familiar with the bike course along with past winner Nigel Unwin, both having very strong bike legs with Nigel’s split being the fastest of the day 51:39. Nigel worked hard in the kayak with Simon Hammond (pair) to move into the lead, meanwhile Ian Smith, (great to see him back in action after injury problems) was flying in his kayak producing the fastest split 47:09. So onto the run, Nigel held onto his lead coming 1st 2:45:45 with Ian chasing him down coming 2nd 2:46:48, Chris Hammond came 3rd 2:50:15 with Alan Cole in 4th 2:51:13, this gave Alan enough points to take the Vet 40 2017 BQA Trophy Prize.

Meanwhile there was a battle going on for Trophy Points between Vet 50’s Julian Brewer, Nicholas Farnell and Cliff Odgers, Julian and Cliff have been consistent all season, and had extra points in the bag. For Nicholas his Bude points had to count, he finished 9th overall which gave him the same points as Cliff, so with the 4th race taken into account Cliff took the Vet 50 2017 BQA Trophy Prize. Julian after some strong races this season had enough points for him to take the Overall BQA Trophy, a well deserved winner as he has been a keen Quadrathlete and BQA member for many years now!

In the Ladies Race, once again it was a battle to the end between Allison Parritt and Jean Ashley. Jacqueline Davies had a strong swim and was 1st out of the water, with just over a minuet’s lead going onto the bike. Jean caught her up at the bottom of the first big climb and had pulled away by the top of Millook. Allison however was also having a strong bike leg and she then caught Jean up on the way to Wainhouse Corner, they swapped positions a couple of times, but Allison had the edge and arrived back to transition 1st. Jean quickly moved into the lead on the kayak, but Allison paddled strongly and kept Jean in her sights. Jacqueline was also paddling her new kayak well, so it was looking like it was all down to the run! Jean pushed hard and stayed in the lead for the first half of the run, but Alison wasn’t going to give in, she overtook Jean on the well-known ‘ploughed field’ and went on to win in 3:15:19, with Jean in 2nd 3:16:53. Jacqueline stayed comfortably in 3rd 3:35:22. Emma Whitehouse came in with a big smile in 4th 3:45:41.

Every single person that finished the race deserves a mention, it’s always challenging, you never quite know what the Cornish Coast will throw at you, at least the Jelly fish didn’t come back, the weather was kind, but those hills never change and it always lives up to its Name …. AWESOME!

A Huge Big Thank-you To Simon and his Wonderful Team for Hosting the Race. A massive thank-you to all the marshals, the Bude Surf lifeguards for looking after us and showing us the way! It was great to see plenty BQA members racing, plus all the other athletes and first-timers! Plus all the Teams and Pairs Entries … an excellent turnout. I hope you all enjoyed it and will be back to support Shoreline Extreme Sports for more fun next Year … and to top it off Bude will be the BQA National Championships 2018!

See you next year … Jean Bude as Awesome as Ever

Be the first to comment on "Bude …. Fantastic Racing to the Very End"