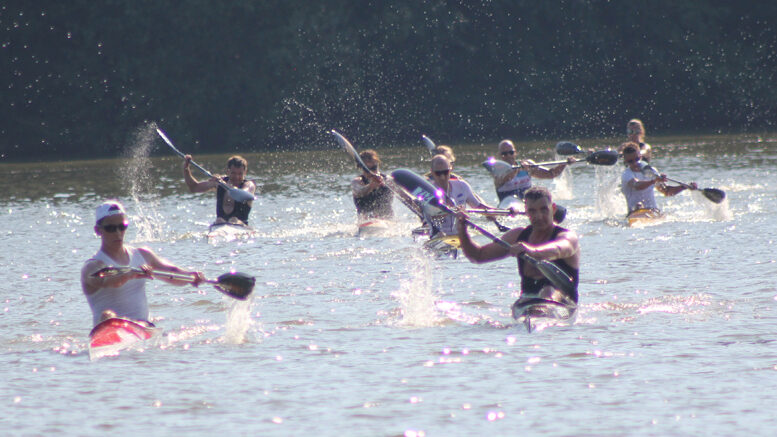 Following months of uncertainty and many restrictions due to the Coronavirus, there is now in many countries some light at the end of the tunnel and a gradual return to normality. With this the first competitions can take place. The first quadrathlon race was held last Saturday in Kapsovar on the Deseda Lake (50km south of the Batalon Lake).

In hot summer conditions, with the temperature around 30 degrees, 60 athletes assembled on the start line. As expected the 750m swim was non wetsuit. The early leaders were Peter Ruzicska (HUN), Stefan Teichert (GER), Ferenc Csima (HUN), William Peters (BEL) and Krzysztof Wolski (POL), who after the swim, were separated by just a few seconds. Meanwhile in the women’s race Lisa Teichert (GER) was once again in front, with about 40 seconds lead ahead of Lilla Kovács (HUN).

On the bike leg, with its turnaround point at 10km which had to be passed twice, Csima and Peters took the lead but Wolski and Teichert still had the leaders in sight. In the women’s race Lisa Teichert increased her lead on Kovács. It was unfortunate, however, that the quadrathletes had to share the bike route in the second lap with the triathletes who started a few minutes later and unlike the quadrathletes, were allowed to draft. This led to a situation where sometimes there were unfair conditions in the middle of the field of the quadrathletes and it was also quite dangerous on sections of the narrow route.

The dual at the front between Csima und Peters continued during the three laps on the water. Despite the headwind both athletes could only cool down slightly in the warm temperatures. However the wind blew the buoys slightly which resulted in the final distance being 5.5km! Unhindered by the wind David Kotrc (CZE) und Zoltán Zoboki (HUN) paddled into the reach of the podium with the fastest kayaking times. Amongst the women it was only the 16 year old Kovács, who was within reach of the German Teichert and who might still have a chance of a surprise in the run.

In accordance with the Corona rules, the organisers has to relocate the transition area from last year, so it was quite a long run between the disciplines, especially the routes to and from the kayak leg. Also new was the route of the run leg which this year took place on the opposite side of the lake and was no longer flat like the previous year. Almost everyone expected Peters to distance himself from Csima and run home to take the win. However the opposite was the case. Csima, who isn’t known as a strong runner, performed fantastically in his home country. Peters couldn’t match the pace and finished in second place behind the Hungarian. The race for third place was exciting, where at the end, just 30 seconds separated Wolski, Zoboki and Kotrc from third to fifth position.

In the end, in the women’s race Lisa Teichert ran towards a safe victory as Kovács struggled in the heat. Yet again it was the race for third place that was exciting. After the kayak leg Susanne Walter (GER), Kata Balázs und Krisztina Sinkó Panna (both HUN) were close together. Walter had the best run legs of the three athletes and finished ahead of Balázs und Panna.

Last year’s winner, Tomas Svoboda (CZE) could unfortunately only compete in the relay race. Due to health reasons, the exceptional athlete can only do swim and kayak training. In a team with his twin brother (and former Olympic champion) David, the win was almost a forgone conclusion. Unfortunately, the strong competitor, Gergö Badar (HUN) was also only a spectator; the world champion was concentrating on racing as a professional in the middle distance triathlon the next day, where he finished second.

A bit of a side issue, at this late start of the 2020 competition season, was the fact that the European Sprint Championship titles were also awarded at the race in Kaposvar. Titles, which this year, perhaps don’t have the same meaning that they have had in previous years. On the one hand, travel restrictions have not yet been lifted in all countries, and on the other, there have been numerous international differences in the ability of athletes to train. Nevertheless, the WQF decided that the race would have the status of European Championships. It was meant as a sign of the return to normality and in addition Quadrathlon is not a professional sport, so there will always be very good athletes who, for various reasons, cannot take part in the important races, even if they would like to. It was all the more gratifying that in the end numerous top athletes from last year successfully made their way to Hungary.

At the moment in the WQF World Cup, three other races are able to take place: Ratscher (GER, WM Sprint), Tiszafüred (HUN, Middle) und Cazalegas (ESP, Sprint drafting race). All three races are planned for September. However, as is unfortunately the norm this year, short-term changes may occur. There will be a World Cup result if at least three races take place. However, no glass trophies or medals will be awarded this year.

Alongside the World Cup races it is hoped that further smaller races can be held this year e.g. Pilsenman and Miladatlon (both in CZE). Please always get the latest information from the local organisers.

To end this report, we want to thank Peter Attila and all the other the organisers in Kaposvar, who despite difficult circumstances, were able to run the event. But even those, who had to cancel their event, have our respect and assurance that we will be back next year! 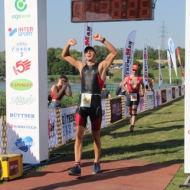 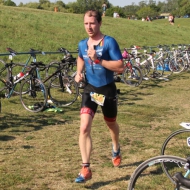 Strong but on this day only 2nd place for William Peters 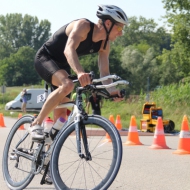 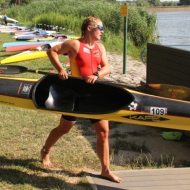 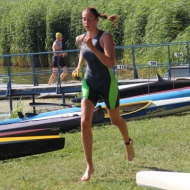 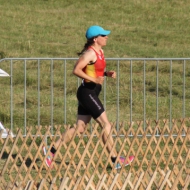 Makes the jump to the podium in the end: Susanne Walter
Weitere Bilder