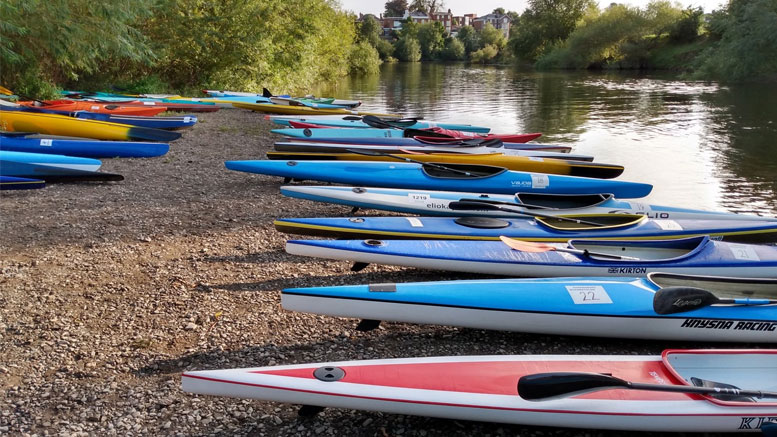 We had a great day’s racing at the 7th Shrewsbury Quadrathon, it was given WQF World Cup Status a true testament to the Event organizers Phil Holden and SYTri. The Event as always sold out at the end of June with 23 males and 21 females entered! The weather this year was perfect, as always the race was brilliantly organized and the atmosphere buzzing! The racing was top class with PB’s and personnel triumphs from many first time Quadrathletes!

Our top GB athletes and age groupers were all looking for World Cup and BQA Trophy points, with World Cup leader Ferenc Csima coming over from Hungary in the hope of top points too!

In the men’s race it was a close battle to the finish. Together out of the swim in first was Steve King and Alan Cole in 5.01, with Ferenc a minuit down 6.01 and James Block 20 seconds later. Steve pulled away on the downstream leg of the kayak, but chasing him down was Ferenc and James. Ferenc moved into 1st place and James worked really hard to overtake Steve with James producing the fastest Kayak split of 20.14.

On the Bike Steve is redound for his fast times and he started to chase Ferenc down, Steve’s bike split was the fastest of the day 36.35 and this moved him back into first place. So onto the run Steve knew he had his work cut out as Ferenc would do his best to chase him down! Ferenc ran the fastest split 18.59 but it wasn’t quite enough to catch Steve, he held on to first place winning in 1.24.31, Ferenc in 2nd 1.24.58 with James holding onto 3rd 1.29.33 with Alan producing another fast run split coming 4th in 1.29.33

There was a fantastic turn out from the Ladies, with 21 competing 14 being BQA Members! Helen Russell was first out of the swim 6.43 with Jacqueline Davies hot on her heals 6.47, they both paddled strongly almost together most of the way, Helen just slightly ahead by 5 seconds 26.01. Helen was only just in the lead going onto the bike, Jacq had a slightly faster bike split by 6 seconds 43.07 … so it was all down to the run. Helen held onto the lead and took 1st place in 1.40.35 and she also secured the Overall BQA National Trophy for 2019. Jacq raced into 2nd putting in a great new PB in 1.44.01. Mean while back from a broken collar bone Natalie Abbott was having a strong run and moved up to take 3rd, (1.48.35). There were some fantastic performances from all of the women, strong racing from the age groupers and plenty of big smiles and positive feedback from those newbies!

A great day out – though I must say its so hard on the sidelines, I would of been much happier in my Lycra, though I did enjoy cheering you all on in your kayaks! However it was great to see how much everyone enjoyed being part of the Quadrathlon … I did feel very proud of all the Quadrathletes and BQA members, the feel good factor we portray is second to none, it such a friendly and inclusive sport to be part of we are so lucky to have such great supporters … thank you long may it continue!

I also had great pleasure in presenting Lance Ball with the ‘The Eric Hatliff Memorial Trophy’ 2019 For Endeavor. Lance has shown Enthusiasm & Commitment To Our Sport for many years showing true dedication! He has encouraged many newcomers and been a big supporter of QuadKidz, and that’s not to mention the help you have given to fellow athletes during races, which includes mending broken chains and punctures all within his own race! He is a true ambassador for our sport … We Really Appreciate Your Efforts Lance THANK-YOU from BQA.

I also presented Ferenc Csima with the World Cup National Trophy Congratulations to Hungary taking this New Trophy in its first year. A Big Thank you to all our GB athletes that raced in the World Cup races, GB came in 2nd place just short of a few points especially in the under 23 and open categories … maybe next year?

Mud but plenty of Smiles at Dearne Valley