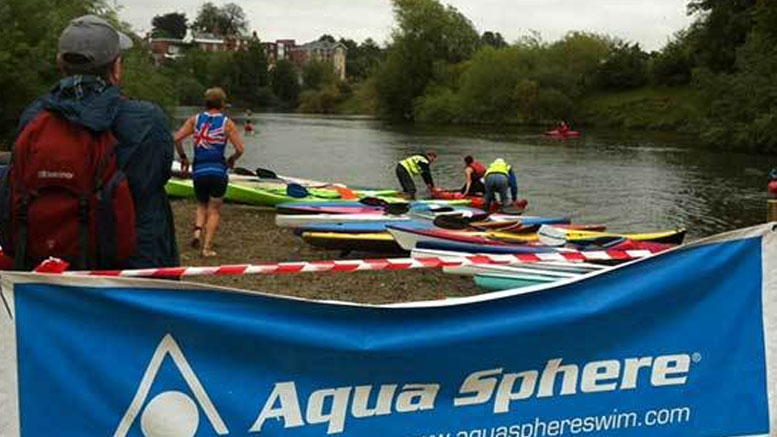 Once again we had a great day’s racing at the 6th Shrewsbury Quadrathon, a true testament to the Event organizers Gill Otto and SYTri. The Event goes from strength to strength and this year sold out at the end of July with 25 males and 25 females entered! The weather this year was showery, windy and a tad chilly, but it didn’t dampen anyone’s spirits, as ever the Quadrathletes were giving it there all and enjoying this great sprint event!

The river was calm with little current this year, so great for the kayak leg. The wind was all over the place on the undulating bike course, which made it feel quite tough this year. The run was fast flat run with the occasional muddy patch, so we expected times to be slightly down on last years. We had good strong field of Quadrathletes, our top athletes and age groupers, plus plenty of newcomers who all gave it their best and finished with happy faces and podium places!

Congratulations to Winner Steve King who took the lead from the start, his closest rival being Bryce Dyer, good to see him back racing a quadrathlon again (he’s been concentrating on Tri’s and Time Trials for the past few years). Steve put in the fastest splits across 3 disciplines (swim/kayak/run) to win comfortably (1.26.23). First timer James Block was 2nd going on to the bike after a strong swim and kayak, but Bryce put in an awesome Bike split, (the fastest of the day including the athletes in the Triathlon), which moved him into 2nd place (1.31.’31). James had a strong run and finished in 3rd just 6 seconds behind Bryce (1.31.37). Alan Cole new also to quads this year had a good strong race and came home in 4th (1.32.07)

There was a real battle going on for the next few places, with BQA members all looking for valuable Trophy Points as the Mens Overall Trophy and Vet40 & 50 are still up for grabs!
Vet 40 Phil Holden came 6th with Nigel Leeson in 11th. The Vet 50 category is very competitive this year with Julian Brewer 7th, Cliff Odgers 11th, Russel Brayer 12th, Peter Chappill 13th so this could get very close at the last race in Bude! John Kavanagh Vet 60 came home in 14th and secured his BQA National Trophy Age group title, a great season for him as he was also awarded with the WQF Glass Globe for winning his Age Group in the World Series too.

There were lots of solid performances from our 11 BQA Male Members, and so good to see them flying the flag for us … Thank-you we really appreciate your support and valuable membership!

There was a fantastic turn out from the Ladies, with more first timers performing well and great to see 4 new Diva Divas Quadrathletes racing again … well done Lisa Grantham, Nicola Perrins, Sandy Cornfield Bebbington and Mandy Lewis! Helen Russell was first out of the swim with Jacqueline Davies hot on her heals, Jacq paddled strongly to take the lead in the kayak with Jean Ashley moving into 2nd place. Helen’s strong biking moved her into 1st place which she held onto to win the ladies race in (1.39.28). Jacq went into the run in 2nd but Jean pushed hard and moved into 2nd place (1.45.17) at the end of the first lap. Mean while newcomer Natalie Abbott was having a great race and moved up to take 3rd, (1.46.45) with Jacq finishing just 30 seconds behind in 4th place (1.47.16).

We had 9 ‘BQA Girls’ racing very well and earning vital Trophy Points, which concluded the 2017 series, once again the BQA appreciate their support.

A great effort from all the other athletes too, good to see plenty of smiles and here so many complementary positive comments about the event. A big thanks again to all the competitors for taking part and also to the ‘Race Organizers’ all the marshals, family and friends that made this yet another successful Shrewsbury Quadrathlon! See you next Season!

I had great pleasure in presenting Gill Otto with the ‘The Eric Hatliff Memorial Trophy’ 2017 For Endeavor. Gill has shown Enthusiasm & Commitment to Our Sport for many years.
She has been dedicated to Organizing the ‘Shrewsbury Quadrathlon’ for the past 6 years producing a brilliant race for us all to enjoy! She has encouraged so many to take part and is a true ambassador for our sport … We Really Appreciate Your Efforts Gill THANK-YOU from BQA. Up to the transition zone and back down Jacqueline Davies starts with the bike Be the first to comment on "Another Successful Shrewsbury Sprint Quad"