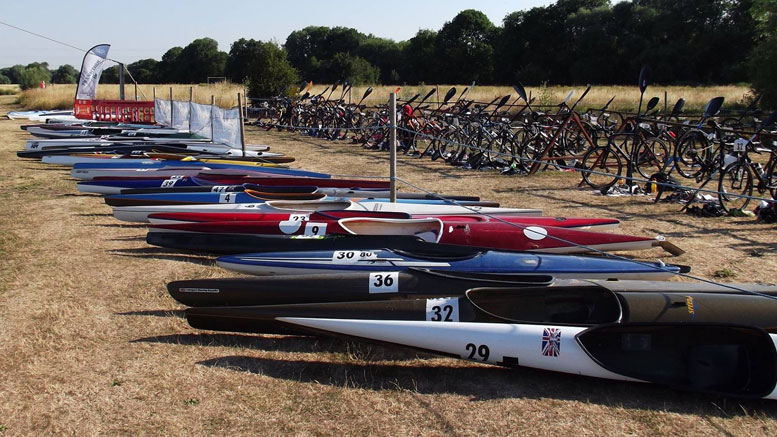 The Box End Quadrathlon was always going hot, with the high temperatures we’d been having, but the racing too was certainly a scorcher too! Ettiene Stott, the 2012 Olympic Gold Medalist in C2 Slalom was going to be competing along with current WQF Champion leader, Ferenc Csima from Hungary. With World and British Trophy series points up for grabs we had a lot of top class athletes racing, plus plenty of newcomers and as ever our strong back bone of committed Quadrathletes flying the BQA Flag!

On the morning of the race the water temperature was over 28ºC and heading to 29, so it was definitely a non-wetsuit swim, this made a few athletes worry about their buoyancy but on the whole I think everyone enjoyed it, it certainly felt very warm we we got moving! We had a couple of nervous swimmers who wanted to use wetsuits, so in true ‘Quadrathlon inclusivity’ we said they could race but they wouldn’t get any trophy points. Speaking to them after the race, they were both extremely pleased and very proud they had finished their first Open Water Quadrathlon!

We all headed into the lake, the first ever compulsory non wetsuit swim in GBR in I can remember, we waited for the Quadkids to walk up the lake to get at their start positions, and at 8.00am we were off! Ferenc Csima and Alan Cole moved into the lead a good minute ahead of the next group, Alan pushed hard and came out in first place 11.19 with Ferenc just 10 seconds behind. Michael Mason, Steve Rust, Alasdair Bruce and Helen Russell all came in around the 12.30 – 12.45, with Bryce Dyer in 13.16 & Etienne Stott 14.01.

Four laps of the lake for the 4.8km kayak, Ferenc soon showed he was a world class paddler and went into the lead producing the fastest kayak split 24.39, Michael passed Alan on the second lap and went on to put in a very impressive time of 25.06. Ettiene in his best discipline produced the 3rd fastest split 27.42, with Ewan Cox, and Chris Carter just 10 seconds behind. However Alan 29.31 and Bryce 29.53 held onto 3rd and 4th place going onto the bike leg.

By now it was getting very hot, the grass was parched and the course hard a quite bumpy, no wind and 15km of 3 hard laps ahead. Michael started to chase Ferenc down and moved into 1st place having a solid ride in 36.37. Alan was riding well and held onto 3rd place 37.22, but with Bryce’s fastest split of the day 35.20 he was literally seconds behind Alan as they came into T3. Special mention to U23 Billy Fadden who also had an amazing bike in 35.21! Etienne was still going well, with Nigel Unwin and Nigel Leeson moving up the field.

The run was 5km following the exact same route as the bike with little shade and getting hotter! Extra water had been put out, by this time everyone was digging deep. There was no stopping Michael he went onto win after an amazing run split of 19.49, taking 1st place in a total of 1.35.36. Ferenc held 2nd place with comfortably and finished in 1.40.39. Alan pulled away from Bryce with a good run split of 22.16 and finished 3rd 1.41.56. Bryce held onto 4th place 1.44.00, Etienne was catching producing the 2nd fastest run split of the day 22.13, finishing 5th 1.44.38.

Helen kept her lead on the bike 43.34, with Jac in 2nd 44.28, Jean flew out of transition on a mission to catch Jac who was about 30 seconds ahead. However things didn’t go quite to plan, when she hit the first bump her seat slipped and jammed completely backwards, this plagued her for the rest of the bike leg, she still managed to hold onto 3rd but had got a lot of making up to do! At this point I must mention the fastest ladies bike split … the forever young Mary White put in an amazing 42.26 … faster than a lot of the men too!

Special mention to our 2 Olympians that raced, it was great to see Ettiene racing with us all and enjoying his first Quad challenge, he also presented our Trophies, and big thanks to him for bringing his 2012 London Olympic Gold medal to share with us all! But there’s also a lot of respect for John MacLeod (Vet 70) finishing in a creditable 2.40, also a GB Slalom Paddler at the 1972 Olympics in Munich. A successful coach junior & senior GB kayak teams from 1979-1981 working through to the Barcelona Olympic Games and beyond. In 2009 he was appointed as Canoe Manager for the London 2012 Olympic Games, where he was know doubt very proud to see Ettiene Stott and his C2 partner Tim Baillie win the Gold Medal!

There were some excellent results from the age groupers too, showing just how strong the field was, Im sure everyone was pleased with their achievements … coping with the extremely hot temperatures and making history in GB’s first ever non wetsuit quad swim, it will certainly be remembered, lets hope the sunshine lasts until the end of our season!

It was the final of the QuadKidz Trophy and big Congratulations to our 2018 National Champions, with Max Underwood Frost and Hermione Ball taking the Boys and Girls Titles, both doing all 3 races in the Series. I am hoping for a race report from them shortly! Well done to all those QuadKidz who have taken part in the series, we hope to see you and your friends next year!

A Big Thank-you to organizer Mark Pryor and his excellent group of marshals for putting on this race, a superb venue and excellent course all within the confines of Box End Park! Also Thanks to all the competitors for supporting our WQF/BQA trophy race, again we have had lots of great feedback and plenty of passion shared for our Small Sport!

Also from Box End there is again a great experience report by Alen Cole:
https://www.alananna.co.uk/blog/2018/box-end-world-cup-quadrathlon-race-report/

Be the first to comment on "Box End World Cup … A scorcher, heat and race alike!"