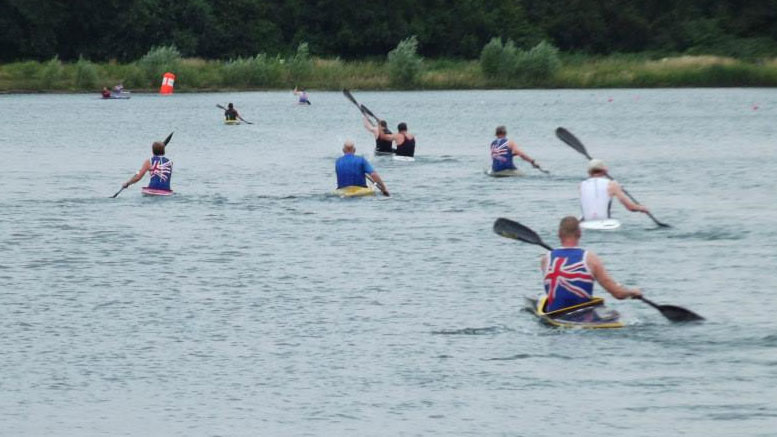 It was wonderful to see some excellent racing and some top class competition, plus some drama on the MTBike course due to overnight rain on very hard ground, several athletes had some impromptu falls on slippy corners, no injuries but sadly a broken rear mech for top Quadrathlete Mike Mason at the Box End Quadrathlon last weekend. The traditional race in the north of London, had a WQF World Cup status for the first time.

A cloudy morning start, the rain had stopped but the wind was going to be fairly strong. It was a little choppy in the swim and a cross wind for the kayak, the wind stayed with us the whole race and was quite strong on the home word straight, but I don’t think it slowed any of us down too much!

Steve Rust was 1st out of the water (12.12) closely followed by one of the British top Quadrathletes Mike Mason (12.14, winner of the Brigg Bomber in May) a 2nd bunch of swimmers followed 30 secs later containing excellent kayakers Adam Norfolk, Stuart West and Nigel Unwin. Adam putting in the fastest kayak split of the day (22.03) caught up with Mike, they stayed together and went out on the bike at the same time. Stuart West (top marathon paddler) in his first Quadrathlon moved into 3rd place, followed by a group of very strong athletes including Nigel, Steve Rust, Oliver Main and John Kavanagh.

Adam and Mike were flying on their bikes, nothing between them it was looking like an extremely close race …. Until on the 2nd lap Mike’s rear mech snapped as it hit the ground too close on a sharp corner, so sadly he had to pull out. Adam increased his lead and produced the fastest bike split of the day (37.15) Cross Bikes were certainly proving to be the fastest and most favourable, though hard bumpy ground with a few slippy patches did cause a few spills!
The race for the next 5 places was hoting up, Nigel and Stuart both had good bike splits, whilst Dil Wetherill, (his first Quadrathlon) Mark Pryor and Phil Holden had even faster splits which moved them up the field.

In the ladies race, newcomer Elaine Palmer was first out of the swim (14.06) with Octavia Chambers just behind and Jean Ashley 30 seconds later. Experienced quadrathlete had a very swift transition and went into the kayak 1st. Jean in her best discipline the kayak (27.40) moved 4 mins ahead of Octavia. Meanwhile on the bike Octavia and Mary White started to eat into Jeans lead. Mary White riding her cross bike had a superb ride producing the fastest split of all the ‘girls’ (45.27). Jean was only 2 mins ahead after the bike but held onto her lead coming home in 1st place 2.02.44 with Octavia 2nd 2.06.12 and Mary 3rd in 2.09.00.

A Huge Thank-you to Mark Pryor and his great Quadrac Racing Crew that put on a superb World Cup Race this weekend 12th July! Excellent organization, a superb course and great marshalls. Mark and his Team of helpers were extremely thorough in every aspect of their organization, a huge thanks to them for giving us a great race in the WQF callender! Swimming next to the water ski complex The field is closely together Small interruption at the paddling with carrying passage