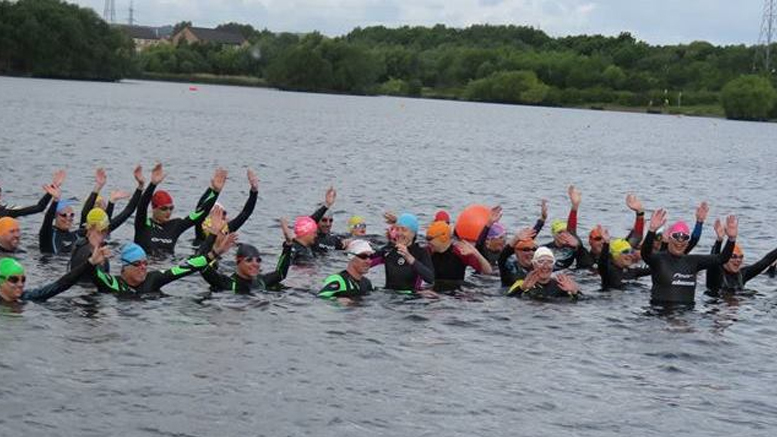 What a brilliant day a Dearne Valley Quadrathlon, there was so much passion for our sport, with non stop smiles as juniors, first timers, and seasoned quadrathletes crossed the finish line! Organizer Mark Benton and his ‘Team’ of volunteers and marshals hosted a great race for us all, there enthusiasm and friendliness shone through, to make this event a huge success, thank -you you did your selves proud!

What a brilliant day a Dearne Valley Quadrathlon, there was so much passion for our sport, with non stop smiles as juniors, first timers, and seasoned quadrathletes crossed the finish line! Organizer Mark Benton and his ‘Team’ of volunteers and marshals hosted a great race for us all, there enthusiasm and friendliness shone through, to make this event a huge success, thank -you you did your selves proud!

Well done to under 12’s Ewan Joseph (Lincsquad) winning the Boys and Hermione Ball winning the girls. Alanna Barron and Chris Thoday (Manvers Tri) in the under 15’s had a real battle, but it was Alanna’s kayaking skills that gave her the edge as she paddled very well into the lead, I’m sure they will both be back with even more determination and skill next year. A huge achievement to all that took part!

After watching the juniors fly past, we were all motivated and ready to get going, the wind had picked up slightly but it was a warm and cloudy so a good temperature for racing, even though the water was a bit chilly at about 15 degrees. It was a real mixture of athletes racing 50 in total, with 28 doing the quad and 22 the Triathlon, we had 9 seasoned BQA Members and plenty of triathletes giving the quad a go for the first time, plus some amazing first timers new to racing but certainly looked like they had given everything and had a great time! It truly was and all-inclusive race, showing the onlookers what an amazing race Manvers Waterfront Boat Club had organized!

BQA members took the top 6 places – Helen Russell was first out of the swim and went onto the bike with a good lead. Cliff Odgers started to chase her down, but it wasn’t until the return leg of the bike course he over took her. The bike was off road and using part of the Trans Penne Trail which consisted of unmade tracks, despite it being muddy in parts it was ideal for cross bikes, as they proved to be the fastest over the course. Cliff went into the kayak first, followed by Helen, Jacquline Davies, John Kavanagh and Jean Ashley, there were a couple of other bikers in between but once they got in the kayaks the seasoned quadrathletes started to pull away. It had started to get a bit choppy in the wind which favored the stronger paddlers.

Cliff held onto his lead in the kayak, and went into the run 1st with Helen not to far adrift. Jean in her strongest discipline the kayak, pulled back 2 and half minutes to catch Jacquline and John by the end of the paddle. Pete Chappill another BQA member had a good solid paddle overtaking a lot of paddlers in sea kayaks and plastic kayaks, they were all doing really well in the conditions, but having to work very hard in these smaller kayaks without rudders. Meanwhile on the run Helen took the lead from Cliff and went on to win in 1.45.42, Cliff ran well and finished 2nd in 1.46.24. Jacquline having a swift transition went out in 3rd place, but very close behind was Jean and John. John tried to hang on to Jean, but with the Long Course Quad still in his legs he had to drop back. Jean moved into 3rd finishing in 1.52.05, with John 4th just 15 seconds behind 1:52:20. Jacqueline held onto 5th 1:54:44 with Pete in 6th 1.57.44.

It’s always good to perform well on race day, but the real Stars of the day were those first timers that gave it their all too, it was so good to see people from all walks of life participating, and to see those juniors taking on the challenge, every single one of them finishing with a great sense of achievement afterwards.

A huge thanks once again to Mark Benton and his support crew at Manvers Waterfront Boat Club, an excellent day full of ‘Firsts’ for many people, everyone finished safely and with a smile which were Mark’s wishes, so bask in your glory, keep training and we hope to see you all next year … Jacqueline Davies at the kayak track Jean Ashley always with a smile 3 races in 2 weeks for John Kavanagh