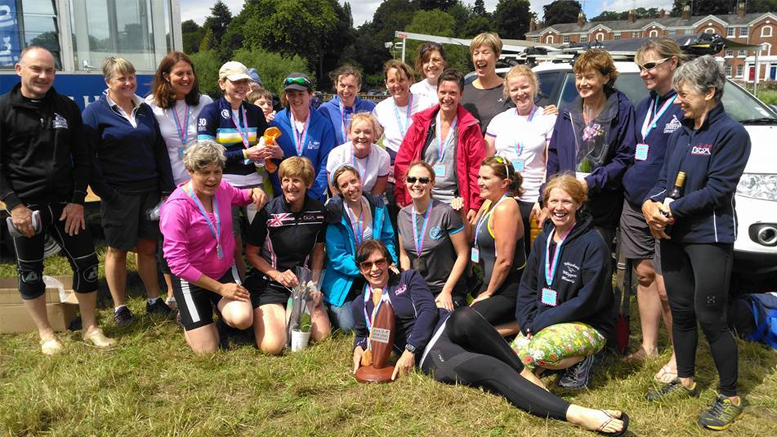 The first ever ‘Ladies Only Quadrathlon’ IN THE WORLD took place on 16 July 2017 on the banks of the River Dee in Chester (GBR), running in parallel to the Deva Divas Triathlon which, in 2016, won the coveted British Triathlon ‘Event of the Year’, Triathlon England ‘Club Event of the Year’ and also North West ‘Regional Race of the Year’! It being the 11th year of the Deva Divas which aims to encourage women into the sport of triathlon, organisers Sally Napthen and Jean Ashley wanted to celebrate with something a little bit different – hence the Deva Divas Quadrathlon – if ever there was history in the making, this was it!

The 30 places available were snapped up in a matter of days – the event sold out before Christmas and the waiting list grew and grew as a result of advertising by word of mouth and the BQA. The biggest draw to the race, apart from it being a World First (did I mention that?!) was the fabulous 12-week canoe course (from beginner to K1 paddler) that the Queen of Quad, Jean, along with Chester Canoe Club coaches John and Carol Hatton offered as part of the training package. And 16 of the Deva Divas took them up on it. Much to the surprise and delight of all three coaches, all the ladies progressed rapidly; so much so that for the day of the race, the type of kayak that was required meant boats were borrowed from canoe clubs far and wide.

The morning of the race dawned and it was a bit drizzly, but that did absolutely nothing to dampen the spirits of the Quadrathlon ladies. All the kayaks were laid out by the wonderful helpers, whilst all the participants racked their bikes, helmets, paddles, buoyancy aids and other race paraphernalia in transition. After a very entertaining race briefing and group warm up for all the quadrathletes and triathletes, we walked together to the swim start upstream. Us quad ladies were the first to go off at 8:20 and after a quick Oggy Oggy Oggy, the race official blew the foghorn and we were off.

As a strong swimmer, Jacqueline Davies took the lead immediately on the swim (13:29) followed closely by Quad newcomers Adele Blakeborough (14:07), Alison Rosenburgh (14:32) and Susan Redfern (14:34). The other ladies swam well with big groups coming in together at around the 16 – 18 minute mark, making the most of the downstream flow. All finished safely well under 30 minutes. Meanwhile at the head of the race, Adele’s prowess in a kayak was soon demonstrated and she passed Jac very quickly on the upstream section and continued to gain distance finishing over 1 minute ahead (23:24) of Jac (24:47). At the same time, other positions were changing and the more experienced quadrathletes’ paddling experience came to the fore with Mary White edging into 3rd (26:40) and Vicky Price into 4th (27:26).
Alison held onto 5th (29:40) but Nicola Perrins, Laura Turner and Sandy Bebbington were only less than a minute behind. The rest of the girls all finished the kayak section without any mishaps – this was the first quad in the UK this year where there have been NO impromptu dips – that in itself is a miracle and is a testament to the quality of canoe coaching from Jean, John and Carol!

Back to the racing, Adele was first out on the bike course with Jac in hot pursuit. Jac managed to make the catch just before the turn point and finished the bike course with the fastest split (50:09) with Adele in 2nd place (52:42). Mary, with a strong bike split (52:28) held onto 3rd but all the other top positions were moving around. Nicola moved up into 4th (52:30) with Vicky in 5th (53:39), but Lisa Grantham with the second fastest bike split of the day (50:15) moved up to 6th place followed by Hilary Boxer in 7th (52:57) with Sandy in 8th (59:57). All successfully completed the bike course in under 1:15 and were then out onto the fourth and final (thank goodness!) discipline – the run!

At this point Jac was leading by about 1 minute, but Adele was slowly reeling her in. Jac managed to stay out in front, but only just, finishing in a total time of 1:56:59 with Adele in 2nd place only 19 seconds behind in 1:57:18. Mary, after posting the 3rd fastest run split of the day (24:15), claimed a fantastic 3rd place in 2:04:02. Nicola retained 4th position in 2:07:59, but an astonishingly quick run by Lisa (21:07) posting the fastest run split, ensured she moved up into 5th place overall in 2:08:26. Hilary had a strong run and moved into 6th place in 2:12:41 with Vicky not far behind in 2:14:44 and Alison moved back up into 8th place with a time of 2:15:03. Every single Deva Diva Quadrathlete started and finished with a great deal of determination and panache.

As a competitor of this wonderful inaugural Ladies Quadrathlon and on behalf of everyone else who raced, I would like to say a Huge Thank You to Jean, Sally, John, Carol, our own transition/kayak support Dave and Cliff and to Chester Tri and Chester Canoe Club for an amazing ‘Deva Divas Quadrathlon’ yesterday! As Jean has already said, we certainly shared ‘The Quad Passion’. The Quad ran beautifully next to the triathlon and it was lovely to see so many women competing – I’m not surprised it has won so many awards. However, I think we managed to spark the interest of a lot of triathletes yesterday – I suspect the entries next year for the Deva Divas Quad will sell like hot cakes!

And finally to the ladies who competed and are now thinking of joining the BQA, a massive congratulations to you all; you are now Quadrathlon Queens – wear those beautiful tshirts with pride! You are also the ‘Prime of Mrs Jean Ashley’!!!