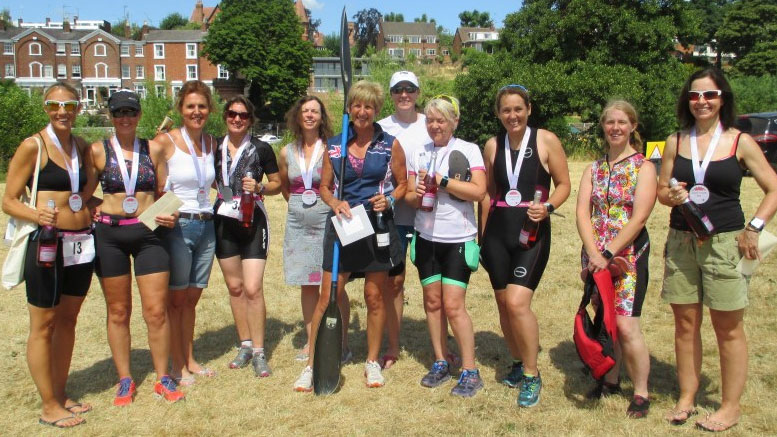 After the huge success of the first ever, not to mention historic, ‘Ladies Only Quadrathlon’ IN THE WORLD last year, event organisers Jean Ashley and Sally Napthen decided they had no choice but to run it again. In parallel to the renowned Deva Divas Triathlon which in 2016, won the coveted British Triathlon ‘Event of the Year’, the second Deva Divas Quadrathlon was set for Sun 8 July 2018 on the banks of the River Dee in Chester.

The 50 places available were snapped up in under 4 weeks before Christmas and the waiting list grew as a result of advertising by word of mouth and the BQA. In a similar vein to last year, the fabulous 12-week canoe course (from beginner to K1 paddler) that the Queen of Quad, Jean, along with Chester Canoe Club coaches John and Carol Hatton offered was taken up by 12 of the girls. I, for one, very much enjoyed reading about their exploits and astonishing progress on the Deva Divas Quad FB page. Jean and Sally also ran open-water swim sessions, a familiarisation bike and run session and a talk on transition. No wonder this race is held in such high regard!

Race day was forecast to be an absolute scorcher (we weren’t disappointed!) and 43 intrepid quad ladies turned up with a plethora of gear, racked their bikes and paddles and put their kayaks in number order, helped by the wonderful kayak boys Dave, Cliff, Mark and Simon. After a very entertaining race briefing from Colin Wilson (it is worth entering the race just for this bit alone!) and group warm up for all the quadrathletes and triathletes, we walked together to the swim start upstream. At 08:20, after a quick rendition of Oggy Oggy Oggy, the foghorn blew and we were off.

This year, despite the lack of flow in the river, there was some really strong swimming with Louise Hanley, a fabulous triathlete taking a big lead (12:03), followed by Jenny Illidge (13:38), Adele Blakeborough (13:58), Claire Addy (14:02) and Timea Harris (14:16). All the ladies swam well and finished safely in under 30 minutes. The kayak section was probably the most challenging, especially for the new paddlers, and as a result the positions moved around substantially. Jenny I, a very strong paddler moved up into pole position (22:44), but it was Jenny Swallow whose blistering pace (21:57) moved her from 11th to 2nd. Adele finished the kayak in 3rd place (24:20) followed closely by Timea (24:13). Jacqueline Davies, meanwhile moved into 5th place (25:07). Ali Pendle, Melissa Leffler, Jill Bradburn and Julie Hicks also had fabulous paddle segments coming in well under 26 minutes. The rest of the girls all finished the kayak section with only 1 mishap, but I’m sure it was more to do with wanting to cool off than a wonky paddle stroke!

Every single Deva Diva Quadrathlete started and finished and was greeted with a huge hug and a medal by Jean at the finish. A fabulous effort by all.

As a competitor of the second running of this wonderful Ladies Quadrathlon and on behalf of everyone else who raced, I would like to say a Huge Thank You to Jean, Sally, John, Carol, our own transition/kayak support, the water station gang on the run and to Chester Tri and Chester Canoe Club for an amazing ‘Deva Divas Quadrathlon’ on Sunday! As Jean has already said, we are sharing ‘The Quad Passion’ – a small sport with a big heart. I absolutely love the fact that the Quad is run in parallel with the triathlon and it is wonderful to see so many women competing.

And finally ladies, to all of my fellow competitors, especially those of you who are new to this wonderful sport, huge congratulations to you all; you are most definitely Queens of Quadrathlon. And as I said last year and will repeat often, you are the “Prime of Mrs Jean Ashley”!!!