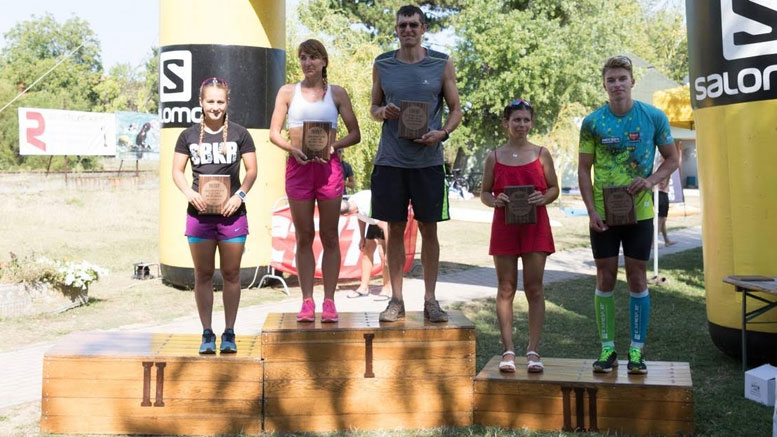 33 individual and 14 relay participants toed the line at the Quadrathlon National Championship in Balatonakali (Hungary). Numerous athletes were missing there due to a Thriatlon organized in Budapest. We hope next year they could be welcome to this event. Nevertheless those who have real Quadrathlon-veins were in Akali too and they made a great competition.

Csima Feri had no rival, he ended with a huge superiotity, overtaking even relays.
But let’s see what happened.

The competition started with swimming of 800 m. 5-6 swimmers led the field with seconds of differences among them. Tomori Gergő could gain some extra time with a great run to the transition zone so he was the first in starting his next partner in relay – Kassai Álmos – for cycling. The second in swimming was the 12 years old Kollek Bálint who competed as individual deserving for it a huge and special congratulation.
Individual competitor Partics Katalin came out of the water with the third best time what meant serious advantage in the categorie of girls.

The cycling track of 20 km was not too easy but led in an amazing landscape on a perfect blacktop surface. After crossing villages Dörgicse and Vászoly it returned to Akali. The track is a real roller coaster requireing quite effort in both direction. Csima Feri was the first in cycling and took back the first place for his team as he competed not only as individual but in relay too.

Rácz Dani (18-22) and Steinbach Feri (16-17) finished the bike stage at second and third places demonstrating junior’s growing potentiality in all disciplines.
Great majority of participants was young and they performanced very well. It was good to see the new generation and so this sport’s possibility in progress/development. Seeing general times it’s obvious that these youngsters are’not joking. Among individuals the U15 Tapaszti Bence finished on the second place ahead of Rácz Dani who hadn’t to be sad at all with his general third time.
So let’s pull the socks up, young athletes are coming!

Returning to the cycling: Partics Katalin was saving her advantage in women’s individual but Juvanzic Edina was unstoppable in cutting back the difference with her 7-th general cycling time.
The next event was the 4km kayaking. Conditions couldn’t have been better. Perfect flat water, close to shore course, good weather.
There were some slight complains about warmth but heat is preferable to heavy rainfall, doesn’t it?

Csima Ferenc and the KVSC Mix team get out of the kayaks at the first place helping one another but the Honvéd team didn’t give up either. They set off for the running leg with a disatvantage of 40 seconds. Feri was invincible in paddling too, but the rest of the field was strongly varying as the kayak specialists started to lost their disatvantages. When Feri started his running some participant still were cycling – just swimming were totally finished.

Individual starter Tapaszti Bence with his general best time in kayaking got up to the second step of the podium and could keep this place after running too. The ranking among individual girls was formed in this etap. Partics Katalin was defeated by Bodolai Fanni, Juvanzic Edina and Bognár Anna too. Edina has just half a minute of advantage when tarted running.

The exactly measured running track of 5 km led inside town Balatonakali. With two nutrition points – one in transition zone and one at the turning point the heat of 34 C became supportable.
Kassai Álmos took the first place of this discipline leaving behind the runner of the team KVSC Mix winning the first place for his own team.

Six of the first general ten places were taken by juniors under 23. Two of them could step up on the podium too. 12 years old Kollek Bálint took the general 10-th place.