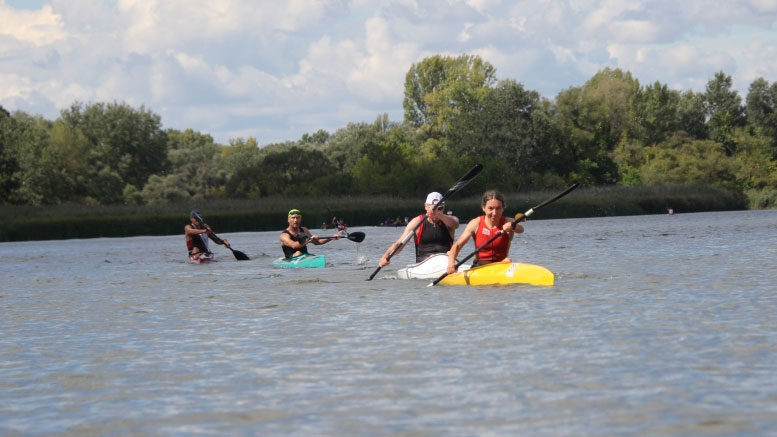 On 11 Sept the Middle Distance Word Championship was hold in Tiszafüred Hungary. The event was organised again by the Hungarian Sri Chimnoy Marathon Team with the help of local canoe club on the water. The weather conditions were like always in last years – late summery – with 25 degree air temperature and 24 degree water temperature – so no wetsuit was allowed for the swimming. At the starting field besides host country athletes from Germany, Czech Republic an Switzerland were participating.

In the men’s race Ferenc Csima (HUN) took the lead during the 2 laps swimming course. He was followed by the chasers group consisting of Leos Rousavy (CZE), Tamás Kocsis (HUN) and David Scheurer (SUI). On the 40 km 1 lap flat bike course on the Tisza dam, Csima increased the gap while Scheurer caught Rousavy just before the transition. On the kayak leg the first place was already decided because Csima built up a more than 20 minute gap. Scheurer and Rousavy competed head to head until the last kayak lap, where the Czech capsized and so the silver medal was also decided.

In the women’s race Csilla Ódor-Sápi (HUN) took the lead followed by Ellen Mielke, and Susanne Walter (both GER). On the bike course Walter overtook her rivals and built up a comforting gap in kayak and running to win the gold medal. The decision for the silver medal was on the running course where Ódor-Sápi overtook Mielke and secured the second place.

The last World Cup race in the season which is also the Sprint Distance European Championship will be hold in Cazalegas Spain on 25th Sept. Independently from the results of the last race most World Cup positions are already fixed. The winner of woman’s overall Word Cup in 2022 is Susanne Walter (GER). The second place is going to Ellen Mielke (GER), the third place is going to Heike Steininger (GER). The winner of men’s overall Word Cup in 2022 is Ferenc Csima (HUN) The second place is going to Leos Rousavy (CZE), the third place is not finally decided yet.

Týn: Svoboda a new guy for Badar and Peces