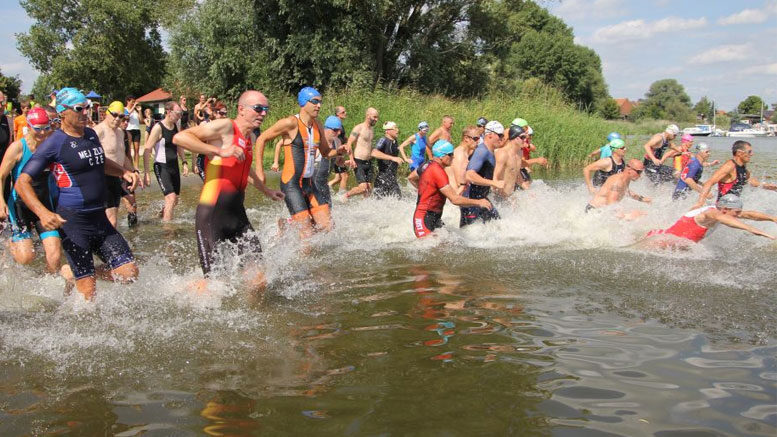 A quadrathlon competition has been held in Wassersuppe since 2011, organized by the local sports club Langlaufgruppe Wassersuppe and Hartmut Bölke and his team. This year, for the first time, an international competition, the World Cup, was held here. The day before the event, the water quality was not ideal in the coastal area due to the blue algae, but fortunately the night wind and waves improved the situation a lot until the next day’s start. 40 competitors lined up at the start. In addition to the home country, the Czech Republic, Austria, Hungary and Poland were represented.

The water temperature was pleasantly warm, so the use of neoprene clothing was not allowed. The 750-meter swim was led by the Teicherts Stefan and Lisa. The chasers followed them with a lag of about half a minute. Aside from the first 500-meter cobblestone section, the bike track was very fast. On the flat, high-quality asphalt road, completely closed to traffic, the fastest ones covered the distance of 19 km above the average speed of 40 km / h. Thanks to his excellent cycling, Ferenc Csima took the lead from Stefan Teichert. However the fastest cycling time (27:32) was driven by Nils Brüggemann, who came in third. In the women’s race, Lisa Teichert was also able to maintain the advantage she gained in swimming in front of Susanne Walter and Gabi Menke, who were trying to chasing her. Kayaking posed a difficult challenge to all participants. The rising wind whipped the water to the crest in the lower round of the track. This was a challenge even for more experienced kayakers. Some quadrathletes capsized or were only able to move slowly, resulting in a significant loss of time. For men, there was no change in kayaking in the first two places. Being an experienced kayaker, Csima further increased his advantage. For third place, however, a big battle seemed to formulate between Eric Lieseke, Lars Koch, and Krzysztof Wolski, who got out of the kayak in that order. There was no change at women during kayaking either. The gap grew between Lisa Teichert, who was in the lead, and the chasers. On the 5 km long running track with varied pavement (earth, sand, gravel, asphalt) Krzysztof Wolski completed the best time (18:19) and thanks to this he came up to 3rd place. The gold was won by Ferenc Csima, the silver by Stefan Teichert. Final order for women: Lisa Teichert, Susanne Walter and Gabi Menke.

European Sprint Championship: All Unclear until the Finish