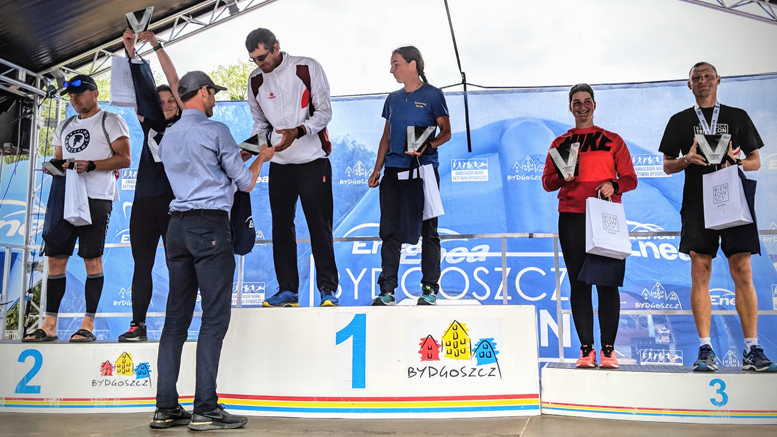 At the first weekend in July as a part of the big triathlon event in Bydgoszcz – where more than 4500 athletes participated – the polish quadrathlon World Cup race was organised. Besides home country participants, athletes from Hungary, Germany and Czech Republic were registered to the race. The weather was rather cold with 19 degrees and a strong western wind blowing at 35-40 km/h speed. The quadrathlon started as the first wave of the 1/8 ironman race. The swimming start this time was not a mass start. Competitors started in random pairs every 8 seconds. As all the athletes started within 2 minutes everybody could follow his/her actual position well during the race. Swimming was downstream on river Brda and the distance was rather short at 500 meters. This made swimming times around 5 minutes possible. The 21 km bike course was on closed flat roads, with only few turning points and good surface. The best athletes could reach an average speed above 40 km/h. The kayak transition was rather far away from the bike transition, so the competitors had to run first 1 km to reach the kayaks. This distance was counted to the running part at the end as it was on the same way as the normal running course. The kayak course was 3,5 km long and 1 circle on the river Brda. The kayak course crossed the historical city centre, the turning point was in front of the Opera house. At the end of the kayak course the running part continued with the remaining 4,5 km (in total 5,5 km) on both sides of the river bank.

In the men’s race the polish Sylwester Swat started the swimming with the best time of 5 minutes. He was followed by a chasing group of Krzysztof Wolski (POL), Ferenc Csima (HUN) Leos Rousavy (CZE) and Mateusz Witek (POL). On the bike course Swat increased the lead to almost 2 minutes. He finished the 21 km within 28 and half minute which is an average speed of 44 km/h!. Wolski, Rousavy and Csima were also working hard on the bike course. In the kayak course Csima overtook the leading three and was able to built up a 2 minute lead. Also Rousavy performed well on the kayak and climed to second place, while Swat was loosing many positions on the kayaking. On the running course Csima had enough advantage to keep the first position. Rousavy finished second before Wolski and Witek.

In the women’s race the polish athlete, Isabela Pertek, came out from the water with the best time of around 6 minutes. She was followed by a chasing group of Susanne Walter (GER), Katarzyna Warczak and Martyna Cabaj (both POL) half a minute behind. On the bike course Walter built up a big lead of 4 minutes and increased it further on the kayak course and secured her gold medal. Cabaj also broke awayfrom the chasing group on the bike and won the silver. There was a big battle for the bronze medal between Pertek and Warczak. They were head by head until the kayak course where Pertek was able to paddle better and won the bronze. 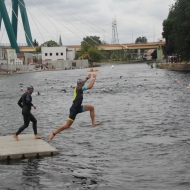 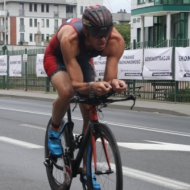 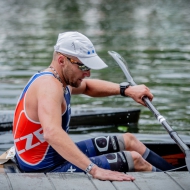 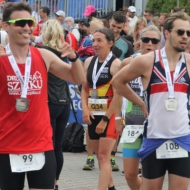 Susanne Walter is also a girl for the total World Cup 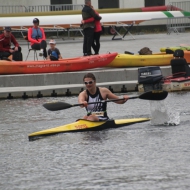 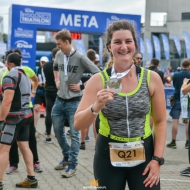 Be the first to comment on "Bydgoszcz – Polish Quadrathlon World Cup"