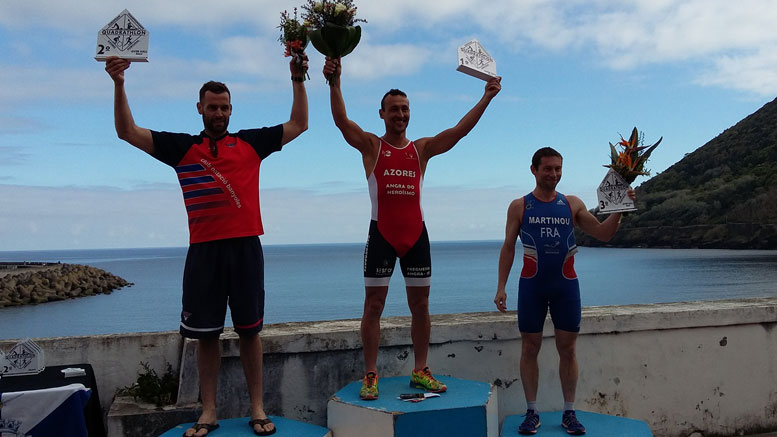 The Quadrathlon World Cup season 2018 began last Sunday with breathtakingly beautiful scenery and exciting competition. The Azores hosted the race on the charming island of Terceira in the middle of the Atlantic Ocean between Europe and America. This was the first time the Sprint European Champions were to be decided on this Portuguese island. At this early stage of the season there was much interest to see who had come through their winter training well and was able to reach a peak in form. Many top athletes were expected, so the excitement was high.

The prospect of a competition was not the only thing on offer in the island capital Angra do Heroismo. The event is centered on the beach promenade, between the Atlantic and the historic old town with Mount Brasil rising above it, which is reminiscent of the Caribbean. It was on the slopes of this old volcano that the MTB route wound around. To top it all there was fantastic weather with sunshine, 25 degrees and hardly any wind. Everything was rounded off with a comprehensive finishers buffet: soup, sandwiches, steak, cakes, deserts and fruit. Plenty for everyone to replenish their strength after their efforts.

The course and conditions proved a good test of the quadrathletes, with just the MTB track giving a serious challenge. The steep short climbs were the same as last year but as an added difficulty parts of the route had developed deep ruts as a result of rain. This meant that extra technical skills were required. This became clear on the day for route inspection when both Laurent Martinou (FRA) and Tomas Svoboda (CZE) had crashes. There were no serious consequences but, unfortunately, the Czech did not start in the solo event and only raced in the relay.

On race day the Spaniard Albert Corominas dominated as usual in swimming and in the kayak section and then put in a strong MTB performance. After his performance at the World Championship last year in Slovakia he has been motivated to train more – with success. In the end it was not quite enough for first place. The local – Pedro Bartolomeu knew the course well. Not only is he the main organiser of the race, he also trains regularly on the course and had the spectators urging him on. Behind after the swim he fought his way up to second place on the MTB and caught up metre by metre while running. Shortly before the finish his chance came and he overtook Corominas and was met by his wife as he crossed the finish line. Third place went to the Frenchman Martinou, helped by his strong running performance.

For the ladies Lisa Teichert once again showed the men up by being placed in the top ten competitors. It was a pity that she lacked many female opponents. The only other Woman was Mandy Greenaway (GBR) who suffered from two punctures. She was able to fix one but was then in danger of having to retire. The sporting spirit of quadrathletes was shown at its best when Lisa lent her bike to Mandy and enabled her to complete the course.

It was a great decision by the organisers to separate the starts for solo competitors and relays. In the morning the solo entrants set off and then, in the afternoon, they had the chance to take part in the relays alongside some of the local athletes. This opportunity promotes the camaraderie and friendship among the athletes, who can then compete not only against each other, but also with each other. In the end, the win went to an international relay with Svoboda (CZE), Csima (HUN), Halasz (HUN) and Martinou (FRA) ahead of the local teams. However, the best of the locals from each discipline could have overcome the international athletes had they been combined in the same team.

The only criticism of this competition was that the running course (which was a bit short last year) was a bit too long at 6km. And so the outcome of the race could have been quite different.

After the competition some athletes used the following week to train in the Azores and to get to know the beautiful islands better. There is much to discover here and is well worth a return visit!