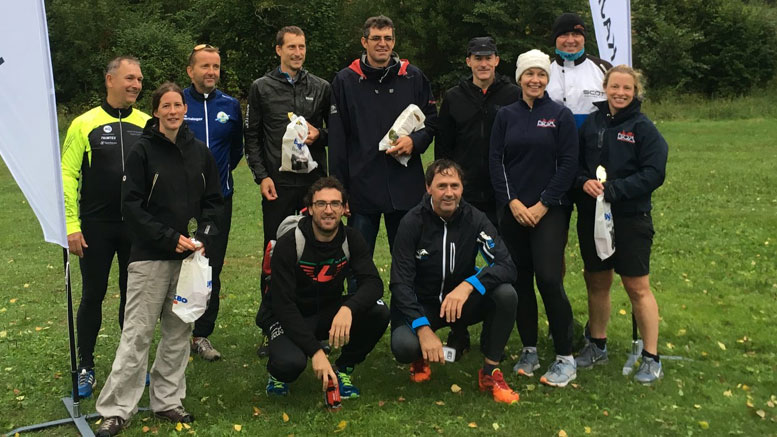 Last competition of Quadrathlon World Cup was organised in Oslo, Norway. After one year break Katarina Liptakova and Oslo Kayak Club organised again a competition at the Bogstad lake.This time the distance was sprint and the bike session was mountain bike. Starters were from 5 countries, beside home country quadrathletes from Great Britain, Hungary, Spain and France participated the race. The weather conditions were rather cold and windy at the start (temperature just above 10 degrees). The 750 m swimming was started at noon in the wavy water.

In the woman’s race British and Norwegian ladies competed for the podium places. After swimming Ruth Vingerhagen was leading, followed by Jacqueline Davies and Mandy Greenaway. On the 15 km hilly MTB course Davies performed the best time and come together with Vingerhagen in depo. During the 4 km kayak Vingerhagen built up a 2 minutes gap and increased it further during the running and secured her first place. Davies kept his second position and Greenaway completed the ladies podium.

In the men’s race Hungarian Ferenc Csima took the lead with almost 1 minute gap followed by Morten Sjursen (NOR), Jerome Manceau (FRA) and Håkon Sitre (NOR). On the MTB course Sitre pushed very hard and come to the second place just 30 sec behind Csima. During the kayaking Csima built up a big gap against the follower group (almost 7 minutes) which was a good basis for him for a relaxed 5 km trail running. It seemed a big competition for the podium places because Sitre and Manceau came out from the kayaking almost at the same time. However Manceau shoved his excellence in trail running and secured his second position. He needed only 17 minutes for the 5 km on a very hilly and sometimes stony running course.

It was very good to see that Norway was coming back into the quadrathlon circulation. The beautiful Norwegian nature and the sport mentality of people are good basis here for further quadrathlon races in the future.

Additional info concerning Hungarian World Cup race:
Word Cup race of Balatonakali was cancelled because of the illness of the organiser. The Hungarian Federation is working now to organise a replacement race during September (we will inform you as soon as possible).