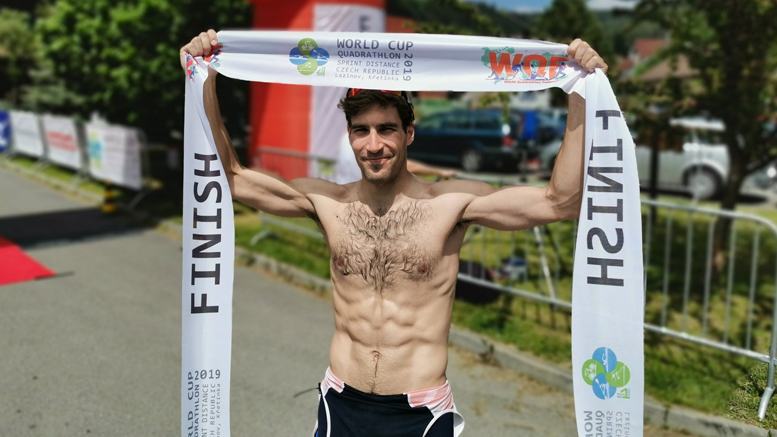 On May 18, with the first World Cup race in Lazinov (Czech Republic), the international quadrathlon season of 2019 has started. The organization by Pavel Knitl and his team was again – as in the previous years always – extraordinary good. Many voluntary staff, rescue personal, the local police and firemen secured the routes for the quadrathletes during the race and provided refreshments during and after the race. They could even manage to improve the weather conditions for the race day after more weeks of bad and cold weather in the region. At the start were athletes from around Europe – Hungary, Poland, Italy, Germany and Czech Republic of course. Thanks to the warming weather and the 1 hour delayed start the water temperature exceeded the minimal requirement of 13 degrees (13.4°C), so the swimming part could be managed as well (a bit shorter than usual).

In the women’s race Susanne Walter (GER) and Fanni Bodolai (HUN) were leading the race heady by head until the running where in the first round they both missed the route and were disqualified for that reason. So the young followers could win the podium places. Magdaléna Koberová (CZE) took the gold, Kata Balázs (HUN) the silver and Radka Štýbnarová (CZE) the bronze medal at the end.

In men’s race as expected Tomáš Svoboda (CZE) – who recently won 6th place in the Aquathlon World Championship in Portugal – took the lead during the swimming. In the chasing group 1 minute behind was Leoš Roušavý (CZE), Ferenc Csima (HUN) and David Kotrč (CZE, first time individual racer, in previous years he won many races in relay teams as kayaker) coming out from the water head by head. During the hilly up and down bike course Roušavý showed his strength in this discipline and closed the gap with some seconds to Svoboda and built up almost 1 minute gap to the chasing group. During the kayak session Csima and Kotrč overtook Roušavý at the first turning buoy where Roušavý capsized in the cross wind and was loosing time while getting back again into the kayak. Csima even overtook Svoboda at the last turning buoy ad had 40 seconds lead after the kayak session. This lead was only enough for the 1st km in running, as Svoboda demonstrated his strength in this discipline as well and won the race with more than 3 minute difference. Csima could keep the 2nd place and Kotrč came to 3rd while Roušavý finished 4th place.