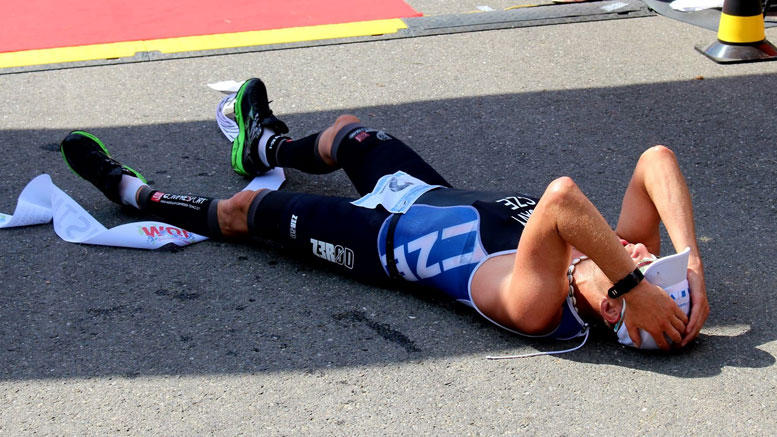 After the last long distance quadrathlon in Hannover (GER), two years ago, the best athletes for this distance met in Lazinov, Křetinka (CZE). This was also the first long-distance race outside Germany since 2001, where the race was held in Prenzlau.

The names on the starting list promised an exciting race. Above all, the winner of the last four long-distance championships, Thoralf Berg (GER) wanted to defend his world title. Spaniard, Enrique Peces also wanted the title because this is the only World Championship distance that that he has yet to win. Similarly keen, was Leoš Roušavý, the Czech athlete, who has already won twice at this distance and this would be his home world championship. Also among the contenders for the podium were Dennis Möller (GER), Laurent Martinou (FRA) and David Jílek (CZE). Ferenc Cisma (HUN) would have been another hot favourite but he was not available as he has been in a collision with a car while cycle training (luckily, he is only slightly injured).

An exciting race was therefore anticipated. With clear blue skies promising a hot day and little wind it started at 8:15 with a long single 4km lap in the local reservoir. A leading group of Möller, Martinou, Jílek and Peces formed, with the Spaniard just off the pace of the leading three. Heading into transition for the first time, Roušavý had over 5 minutes deficit while Berg was another 10 minutes adrift.

The 90km cycle course consisted of a 6 x 15km laps. The surface was very good, the roads were closed to traffic and the gradients were never brutal. It was, however, not flat. About 1200m of climbing were accumulated as the day (and the racing) got hotter. Jílek had the fastest time and took the lead. Three minutes behind was Martinou with Möller only 2 minutes behind the Frenchman. About 12 minutes after the leader, the next strong group of Roušavý, Berg and Peces finished their cycling.

There was more excitement to come in the kayaking. This was 5 laps of the 4km swim course with a compulsory visit to a feed station between each lap. Jílek is known as a strong triathlete, who has also competed in Adventure races, lost time here, in his first quadrathlon. Martinou, who is working on his kayak performance, was also being chased down. As expected, Möller quickly took the lead with the fastest kayak time. Peces also worked his way back towards the front of the race, closely followed by Berg. Roušavý was also able to overtake Jílek and Martinou and was fourth into transition for the last time.

The final discipline was a challenging 20km running route. Four laps, starting with a short steep climb then undulating out to a turn to return. There was a feed station at the start of each lap and because of the high temperature (now over 30C) a water station had been added at the turn point. Möller set off 12 minutes ahead, but whether this would be enough was questionable as this was his weakest discipline. Peces and Berg caught and passed him but then Peces slowed up and had to retire in the third lap because of severe cramp. The conditions were taking their toll. By now the tarmac was melting and it was like running through treacle. This had its effect on Berg too, who was not as fast as usual. This was a chance for Roušavý, which he took advantage of, with a great run. By the end, he finished his home race as a new world champion. Berg hung on to finish in second place, closely followed by Jílek. Martinou, with fast run came in fourth.

Among the ladies, there was a duel between the two Czechians, Eliška Vondráčková and Radka Štýbnarová, with Vondráčková comfortably winning out in the end. Leading the way from the start, she continued to build her lead up to over an hour ahead. The previous champion, Lisa Teichert (and husband, Stefan) did not take part as her focus is on the shorter distances this year.

The relays also had a great race, with some outstanding performances. Six of the seven teams were faster than the individual’s winner. The fastest relay reached the finish line after only 5:41:04 hours, almost one and a half hours faster than Roušavý. Among the other competitors, as kayaker in a relay, Miroslav “Mr. Quadrathlon “Podborsky was there to display his skills again.

A big thank you goes to Pavel Knitl and his team who organised a great event. The task of putting on organizing a long distance quadrathlon is not easy and it was only the sixth long distance race since 2001.