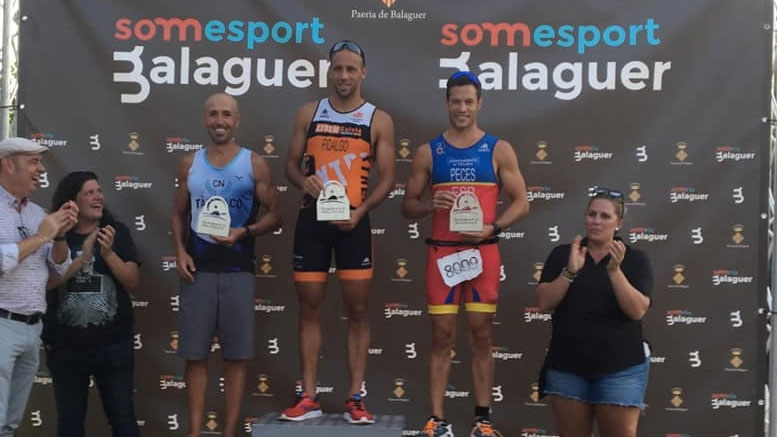 After one month break the Quadrathlon World Cup continued in Balaguer Spain. At the start, besides the home country, there were athletes from Portugal, Poland and Hungary (49 males and 2 ladies). Weather condition were hot and dry. At the afternoon starting time the thermometer showed 36 degrees. The swimming part was organised together with the cross triathlon race so the 50 quadrathletes and the 90 triathletes started the 750 m swimming together in Sant Lorenzo reservoir. Due to the high number of participants the swimming was sometimes crowded especially at the turning points. After the swimming the quadrathletes continued on road bike while triathletes went to the mountain bike course. First 5 km of the bike course was flat and fast. Next part continued on the first foothills of Pyrenees mountains with a 6 km uphill and 350 m high difference. Many of the athletes suffered long minutes to reach the peak and turn to the downhill part which was also not easy because of the sharp turnings. Last 5 km was a relaxing flat route again until the centre of Balaguer where the kayak and running was organised. The river Segre had very low water level on the previous days so the organisers asked for some additional water supply. Some flood gates were opened and the water level increased above the critical level on the race day, but even so the depth was not higher than 1 m in the middle of the river. The kayak course was 4 km with 5 short laps. The course was rather crowded at the end when all the kayaks were already on the water. The running course was set up alongside the river. Surface of first part was big stones next to the river the second part on asphalt road. One part of the running course was overflooded because of the opening of the water gates. It was a big challenge to find the way in the water even for those athletes who checked the running course on the previous days. Here several athletes were losing time while walking and waiting in the water to find the way.

In mens race Miguel Angel and Jorge Garcia got out firstly from the water followed by the former World and European Champion Enrique Peces (who after 2 years started quadrathlon again), Ivan Limia Marc Sancho, Francisco Perez (all of them ESP) and Ferenc Csima (HUN). The 2 leaders increased the gap on the hilly bike course and had almost 1 round advantage on the kayak course. Peces, Csima and Lopez did well on the kayak course. Peces caught the leaders and came out firstly from the water but only with minimal gap. Csima came up to 4th Lopez on the 5th place. On the running course Angel could overtake Peces and won the gold while Garcia took the bronze medal. 4th place went to Csima 5th to Lopez.

In the womens race the decision was already taken during the swimming course where Laura Paya built up a big gap against Eva Castillo (both ESP). Paya could even increase the gap during the bike and keep it during the kayak and running and won the gold medal.

Organisers of the race Axel Marchelino and his team did a great work and put in a lot of efforts to do a high quality race. They helped a lot for the foreign athletes with equipment. Transportation between the two depos were well organised as well as the road closures on bike course. All finishers received high quality long sleeve softshell (thinking on the coming winter period). The refreshment and food after the race was very good including local beer and sausage. And last but not least mood of the whole event was exceptional.

Norfolk SuperHeros raise £49.000 (and still going up) for Charities

Be the first to comment on "Xtreme Quadrathlon in Balaguer"