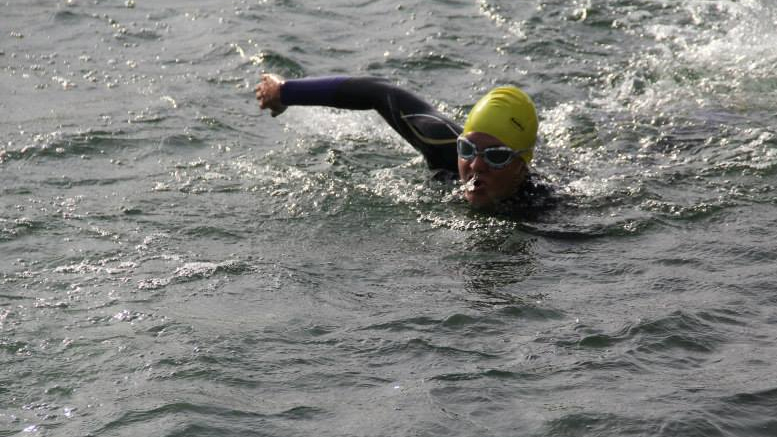 The last Quadrathlon Long distance world championships were held in 2010 in Cologne. 2015 was time again for such a race. In conjunction with the Wasserstadt Triathlon by warm conditions an early 7.15am start saw the athletes dive into the water for the start of a long day.

The swim course saw the athlete’s complete 2 laps of 1.9km in the Lindener Canal. Stefan Teichert (GER.) took the lead and exited the water in 55 minutes with a 1.30 lead from the following group of Dennis Möller (GER) and Laurent Martinou (FRA). Closely followed by Stefan Weger (GER) and Leos Rousay (CZE) and Enrigue Peces (ESP).

On the hilly bike course over 3 laps to complete the 90km we saw the strong rider Martinou take the lead after 22km. He built up a 6minute lead that he would need for the kayak section. Staying within striking distance were Teichert, Wegner who had a puncture and Rousavy and Möller. Staying always in contention was Thoralf Berg (GER) the ex Quadrathlon world champion who had had injury problems and had not taken part in a Quadrathlon for 4 years.

The paddle course was to be a deciding factor. The 20km course over 5 laps of 4km. Martinou lost his lead quickly to Möller and Teichert. Then Teichert began to have a nightmare as he suffered with sitting problems and began to loss enormous amount of time. Berg began to show his strength and moved into 2nd place. Rousay moved into 3rd place. The fastest paddler of the day was once again Steffan Burhart (GER).

Now the final stage in the heat of the day, the 2 lap 21km run along the famous Herrenhäuser Garten. It did not take long before Berg took the lead and just tried to keep everything working well to the end. Knowing that he was being chased by faster runners. He held the lead to become again World champion. Rousay had a fantastic race to take 2nd. Reces finished very happy with his podium place to take 3rd. Martinou produced the fastest run split to move up from 13th to 6th.

Berg triumph was not expected and we can only hope that we see more of this great athlete in future Quadrathlons. Respect must be given also to 72 year old Stefan Barthel who completed the course in a great time. Especially with his top swim performance of 1.21 for 3.8km.

In the ladies race we saw a brilliant performance from Lisa Hirschfelder (GER). There was only one thought on the mind of this top motivated lady since the last few months. The title. Her strong swim performance where she mixed well with the top men. 1.02. This 8 minute lead from Ellen Mielke who put in a perfect days performance to finish 3rd was tops for a lady in the 50W class. But Lisa’s strong swim and kayak where enough to win a well-deserved title. 2nd place was taken by Undine Weihe with an amazing run performance eating into Hirschfelders lead. Who was overcome with tears of joy at the finish? What an amazing day for all finishers.

To add to the day we saw a sprint distance race. Which saw David Kunderer (GER) fight it out with Simon Petereit (GER). They exited the water together. Kunderer held a slight lead on the bike. Then he put in the punch with a great run time. Then it was catch me if you can time on the paddle section. Normally the 2nd or 3rd discipline but in this race the last. Petereit stole meter for meter but it was not to be, as Kunderer took his first Quadrathlon win. Master athlete and old hat at Quadrathlon Christian Schmidt (GER) took 3rd.

By the ladies Susanne Walter (GER) took the win after her slow swim she showed her strength in the other three disciplines. Heidi Seeman (GER) with the fastest Kayak split took 2nd and Judith Gartmann 3rd. Last refreshment before the run for Dennis Möller Undine Weihe as in 2010 to second place