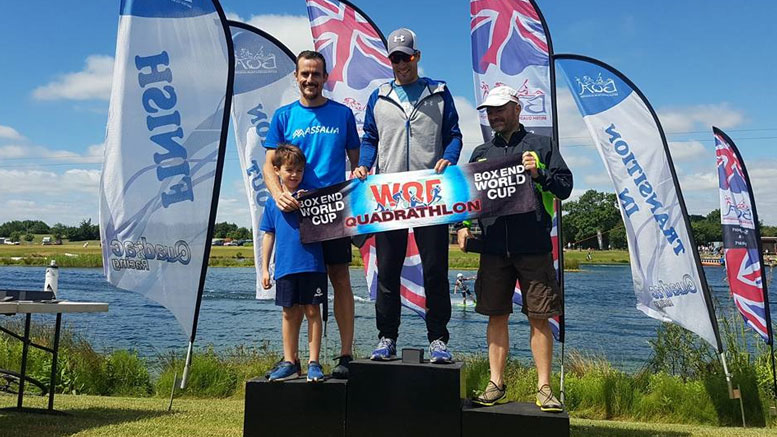 Happy New Year! It has been a bit quiet here for a time and now, after the holidays it’s time to take a look ahead to 2018. The competitions for the World Cup 2018 have been online for some time, but we want to introduce them to you here in more detail.

Before that, a reminder to all to contribute to Quadrathlon4YOU. Please let us have your reports, new competitions, interview of athletes, … fill the site with content.

So, now for the World Cup races this year. The season starts in the Azores (POR), on the beautiful island of Terceira (25.03.). The course has some stunning scenery and demands top performances early in the year. This is where the Sprint European Championships will be held, for the first time a championship race using mountain or cross bikes. The outcome will be exciting, because numerous top athletes are already making plans to take part.

The next stop (19.05.) is also a European Championship, this time over the middle distance. The course in Kretinka (CZE) will be familiar to some athletes because last year the World Championships were held there over the long distance. On that occasion, Leos Rousavy celebrated an emotional home victory – can he also be at the top in 2018?

A regular favourite event will take place in England on 27th May: the Brig Bomber Quadrathlon, a middle distance race again this year. Fast times can be achieved over the flat routes for the bike and run. The organisers of the Lincsquad team can be relied upon to put on a great competition.

In the last two years we were fortunate to have long distance races and in 2018 another Long Distance World Championship will take place. After 2016, we will be back again in Hannover (GER, 03.06.), where there will again be many supporting events and also (on the day before) a sprint Quadrathlon (not part of the World Cup). Thoralf Berg (GER) will surely be strongly motivated to regain his world title.

For the first time the World Cup will stop in Kaposvár (HUN, 23.06.). This event already has some years of experience and the sprint distance will be a perfect dress rehearsal for the world championship in the Czech Republic, just a week later.

This will be in Tyn, on the river Vltava: the World Championship (middle distance). This means multiple strenuous laps for the athletes, perfect for the spectators as they will often see all athletes. Whether last year’s winner and newcomer of the season Tomas Svoboda also wins this time will be discovered on June 30th.

The second race this year where you need a MTB is at Box End (15.07.) in England (but not a technically difficult route). A competition that has been perfectly organized for many years and has World Cup status for the third time this year.

There is another World Cup in Slovakia, again in Komárno, as last year (21.07.). Another flat course where very fast times are to be expected again over the sprint distance. With its location on the Hungarian border, there will certainly be many Hungarians looking for their chance to win World Cup points.

After a year’s break (for the organiser to have a baby), the Quadrathlon in Oslo (NOR) is back in the program. The very well organised event (sprint distance) takes place on the 18th of August. We can expect the Scandinavians to show that they can not only do winter sports.

The second World Cup race in Hungary takes place at the famous Balaton (25.08.). On the sprint course the athletes will have their penultimate opportunity to score points for the Cup classification.

The conclusion and certainly one of the highlights will be at the mountain lake Ratscher (GER, 01.09.) – one of the oldest existing Quadrathlons, this year will host the World Championships over a sprint distance. The central location in Europe will certainly also help to ensure that many international athletes will be on the start for the finale to the season.

The scoring system for the 2018 World Cup remains unchanged, counting the four best results (plus bonus points for championship races and those who complete more than four competitions). What is new, however, is that the first three in the final score will receive a small monetary prize as well as their prestigious glass globes and medals.

In its rules and regulations the WQF has made some minor changes. This now permits championships races to have off-road legs for the cycle and/or run (for example, as on Terceira).

Another rule change is to allow organisers, under certain conditions to permit drafting on the cycle course. This possibility was created particularly to make World Cup races possible in Spain, since there many drafting events take place. (For competitions in Germany or other countries that regularly put on non-drafting quadrathlons, this will not apply). The WQF would like to emphasize that this derogation will not normally be allowed and almost all competitions should take place without drafting.

Another new regulation concerns the disposal of rubbish (littering). Now it is clearly stated that athletes are not allowed to throw away rubbish (for example, gel packs) on the course (except where permitted by the organisers), the penalty for non-observance is disqualification!

Finally, the WQF wants to ask all athletes to register early at the competitions. Quadrathlon is still a fairly small sport and the organisers need planning security, otherwise there is a risk that competitions will be canceled due to lack of participants. Would like to get his title back in Hannover at the Long distance WCH: Thoralf Berg In Tyn the track gets longer: Middle distance WCH Hoping for better weather in the sprint WCH at Bergsee Ratscher Will be hard to beat even in 2018: Lisa Teichert

Be the first to comment on "World Cup season 2018"