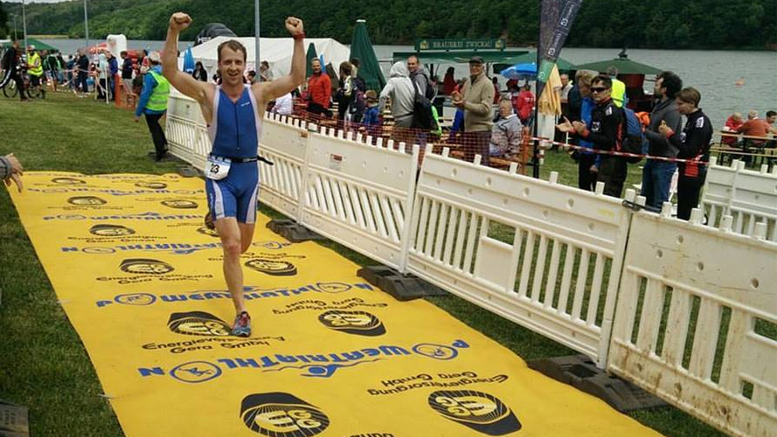 A quadrathlon in the environs of Koberbachtal has been held five times before, but this year was different: for the first time, it was to be an international competition and the European Quadrathlon championship. Another difference was that this year it was a middle-distance and not the usual sprint course. As a consequence, many of the loved, or loathed, off-road sections were not part of the course.

Almost every year the weather has been changeable and so it seemed again. As the day of the competition arrived it stayed dry but there was a lot of cloud and a particularly strong wind, which made it challenging for the athletes, especially when paddling.

As has become traditional, the local shooting club set the athletes off onto the 1.5km swimming circuit. Here a group of four led the way, headed by Stefan Teichert and Dennis Möller (both GER) and accompanied by William Peters (BEL) and David Kunderer (GER).

The cycle route was two laps over hilly terrain giving a total of 36km. Teichert and Möller set off first and built their lead to over two minutes against the now large group of followers. In addition to Peters and Kunderer, Laurent Martinou (FRA), Ferenc Csima (HUN) and Leoš Roušavý (CZE) had joined the chasers.

The kayaking was demanding; five laps, adding up to 7.5km with the wind whipping up the waves. This caused some capsizes in the rear of the field. The athletes at the front had to concentrate to race in these conditions. Möller was first off the water, while Peters and Csima also did well, leaving their kayaks about one minute down, Teichert followed another minute later.

The decisive moves were made on the run course. While Möller was still feeling the effects of his recent races at the long-distance and extended middle-distance from Hannover and he was quickly overtaken. Peters took the lead and was to hold onto it through to the finish. Thus, the young Belgian is the current European champion at the middle distance. He is also the second Belgian, after Patrick Hausens (winner 1992 in Ibiza), to win an international quadrathlon championship.

The fight for the second place became a duel between Csima and Teichert, which the Heidelberger won in the end by a small margin. This was surprising as 3 weeks before he had torn the meniscus in his right knee and had not been able to run a 10km distance before the race. But somehow it went well for him and a silver medal was the reward. Fourth place went to Roušavý, the Czech also felt the effects of the long-distance race from two weeks ago, as did Martinou, who was also suffering from a cold.

Was there to be anything new at the top of the ladies race? Nearly! Lisa Teichert was again dominant field from the start and secured the victory. She even made it into the top ten amongst the strong men’s field. But behind her, Laura Jansen, trained by Lisa, also showed a great performance, which is promises exciting races in the future between these two. The podium was completed by Susanne Walter (GER), who was behind Ellen Mielke (GER) until passing her on the run.

A big thank you to the Red Cross and organizer Ronny Enke, who has managed to make the quadrathlon one of the highlights of their season, despite a full schedule of events with numerous competitions. Many small details (for example, their own swim caps, starting numbers with a quadrathlon logo, beautiful medals) gave the athletes the feeling of being welcomed at the Kober. Mega happy about his performance and his knee: Stefan Teichert William Peters and Ferenc Csima at the Ende of the kayak Fourth place for the world champion on the long distance: Leoš Roušavý Lisa Teichert with rapid steps towards the finish Do you know anyone planning to do the 2022 Quad but who hasn’t signed up yet? This is a quick reminder to say there are only limited places left so don’t delay. Any questions? Message or email us..